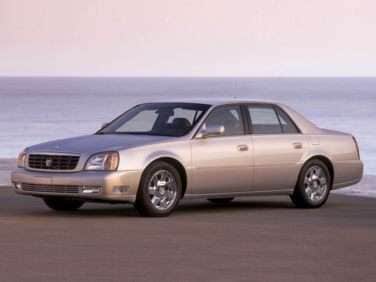 All About Cadillac DeVille

The Cadillac Deville has an illustrious history with the Detroit luxury car maker. The Deville first appeared in their lineup in 1949 and over the next 50 years would become an iconic piece of Cadillac’s image – a large, comfortable sedan with straightforward styling and ample horsepower. By the 90’s the DeVille had morphed into a boulevard cruiser favored by retirees and car rental companies, and it was given a re-design in the year 2000 which saw it increase its market share amongst both of those demographics. The DeVille was often chosen for its large, safe body style and reasonably snappy performance.

There are three different versions of the DeVille available for 2005. The base model and the luxury-oriented DHS trim each make use of a 275 horsepower version of Cadillac’s reliable Northstar V8. This 4.6 liter engine also produces 300 lb-ft of torque, which does an excellent job of motivating the somewhat porky sedan. DeVille DTS buyers are treated to a sportier version of the same engine which provides 15 more horsepower at the expense of peak torque. Both engines use the same 4-speed automatic transmission to handle shifting duties.

Passenger room is excellent, and the DeVille is one of few upscale cars on the market to still came equipped with a front bench seat – although DTS models provide buckets. The rear seat in particular is designed to accommodate even plus sized occupants, making the DeVille an excellent choice for long road trips. All versions of the car come with leather seats and accents, and optional goodies like voice activated navigation and parking assist help to take some of the load off of the driver. Perhaps the most interesting feature is Night Vision, which uses an infrared camera to project an image of the road ahead on the bottom portion of the windshield at night. This makes it much easier to detect animals or people in the road and avoid a collision.

The DeVille is front-wheel drive, but torque steer from the powerful V8 is kept to a minimum. The car is designed to be easy to drive with a good amount of power assist in the steering as well as a suspension which is electronically controlled to prevent body roll and brake dive, improving overall stability. StabiliTrak does an excellent job of keeping driver and passengers safe in emergency situations or bad road conditions, as it actively works against vehicle spins and slides. The vehicle’s transmission and engine perform well in tandem to provide near seamless acceleration when required, and both remain unobtrusively in the background during normal driving. The DeVille is a vehicle which feels responsive and capable, a pleasant change from some of the floatier versions of this car from years past.

While the DeVille name might be inextricably tied to Cadillac’s heritage, the sedan was re-styled for the 2006 model year and given the name DTS, (an abbreviation of DeVille Touring Sedan) which fits in better with Cadillac’s new vehicle identification scheme.