The Cadillac CTS-V Coupe is an ultra high performance two door five passenger sports car powered by a 6.2 Liter supercharged V8, derived from the Corvette ZR-1 supercar, pumping out a total of 556 HP and 551 lb-ft of torque fed straight to the rear wheels through a bulletproof Tremec six speed manual gearbox, while optional automatics get paddle shifters, and gets an estimated 14 MPG in the city and 19 MPG on at speed.  With all that go up front, the luxurious V-Series will accelerate from 0 to 60 MPH in only 3.9 seconds, all with room for five full size passengers inside.

Like all luxurious V-Series Cadillacs, the $64,515 CTS-V rides on a set of 19 inch double five spoke rims wrapped in Michellin Pilot Sport tires housing a set of massive Brembo brakes inside and hiding the magnificent Magnetic Ride Control shock absorbers that were originally developed for America’s best-loved sports car, the Corvette.  All of which were tested time and again at Germany’s notorious Nurburgring racetrack.  The combination of a G-meter, displaying sideways forces, along with a limited slip differential to keep both wheels spinning, ensure hours of tightly monitored tail wagging fun thanks to having over 550 HP on tap.  Optional equipment includes go fast goodies like highly bolstered power adjustable leather wrapped Recaro sport buckets, sport pedals and a suede skin on the steering wheel and shifter, as well as creature comforts like the UltraView panoramic sunroof.  A glide up touch screen multifunction display and Bose surround sound system finish off the V’s high-tech infotainment setup, while LED taillights/tailfins make the supercharged sedan instantly recognizable as a 21st century Cadillac. 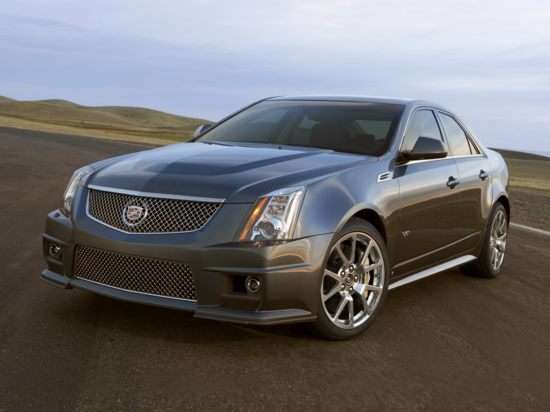