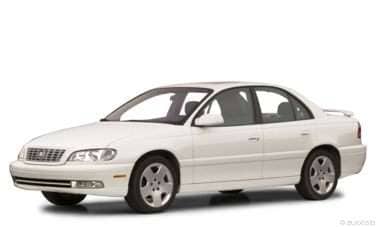 All About Cadillac Catera

The saga of the Cadillac Catera is one of the saddest chapters of the once-proud luxury company’s quest to re-define its identity in the late 1990’s. With a largely front-wheel drive lineup biased towards full-size sedans, Cadillac had nothing to bring to market against the smaller, sporty luxury vehicles from Europe and Japan. As the automaker saw their buyer base shrink, they turned to General Motors subsidiary Opel in 1997 as a source for a new sedan which could break the stodgy mold that surrounded their brand. Heavily marketed as ‘the Caddy that zigs’, the Catera was intended to herald a new era for Cadillac.

The 2001 Cadillac Catera is derived from the Opel Omega, a European sedan not sold in North America. Re-badged and mildly re-styled, the Catera bears a similar look to the Chevrolet Lumina, although it benefits from a more aggressive front fascia and headlight treatment. The Catera resembles nothing else in the Cadillac lineup, indicative of the clean slate the vehicle has been given.

The Catera is powered by a 3.0 liter V6 engine that generates 200 horsepower and just under 200 lb-ft of torque. Controlled by a 4-speed automatic transmission, the engine feels overmatched when attempting to lug around the almost 4,000 lb Catera. The vehicle accelerates dutifully and can cruise at highway speeds with no issues, but for a car that is meant to have a sporty image, the package does not quite deliver. The Catera’s suspension is tuned to be softer than that of the Opel it is based on, which is strange given the purported performance aims of the Catera. However, it is a move that Cadillac felt was necessary in order to appeal to American buyers.

Traction control is outfitted to every vehicle, and while the Catera never feels unstable while cornering, it also fails to engage the driver to the point where they want to want to push the vehicle to its limit, like the BMW 3-Series. The Catera is competent, but not impressive in most situations, and given the vehicle’s market position it fails to deliver the driving experience that buyers expect at that price point. The interior of the Catera displays a subdued treatment as compared to the normal Cadillac trappings. This is not a knock against the car – in fact, the restraint matches the simple lines of the vehicle’s styling. Leather is standard, as is a folding rear seat and all the usual power amenities. Drivers benefit from cruise control, anti-lock brakes and GM’s OnStar assistance and communications system. A rear spoiler, seat heaters and HID headlights can be ordered as options, along with nicer wheels and an upgraded stereo.

The Catera ended its production run at the end of the 2001 model year. A failed experiment for the brand, the Catera also found no place in with the drastic re-imagining of Cadillac’s styling that was just around the corner and which would eventually touch every vehicle in the luxury automaker’s lineup. The Catera was replaced in spirit by the much more popular CTS sedan in 2003.