Although owing a clear debt to its sedan sibling, the 2015 Cadillac ATS Coupe will showcase a relatively distinctive appearance when it arrives in dealerships this summer, along with pricing that starts at $37,995 (excluding a $995 destination charge).

Now, no one is going to confuse the 2015 Cadillac ATS Coupe with the striking CTS two-door, but the former is able to up its game with new bodywork that includes a model-specific roof, doors, rear fenders and trunk, all of which have been massaged not only for a more aggressive look, but also to enhance performance. As explained by David Masch, ATS chief engineer: “All of the surface development unique to the ATS Coupe was done with aerodynamics in mind. We are able to achieve lift and downforce requirements to insure, at top speed, we retain handling without having to add a rear spoiler.”

Other exterior enhancements to the 2015 Cadillac ATS Coupe also rely on the same "form follows function” approach. For example, while the new ATS variant rides on the same 109.3-inch wheelbase as the sedan, the coupe boasts a wider track (the distance between left- and right-side wheels) and reduced height. The result, according to David Leone, Cadillac executive chief engineer: "The wider track ... helps improve steering precision and direct response. The lower roof contributes to a lower center of gravity height, which also reduces roll and improves steering response.”

There's no news about a possible V-Series at this stage in the game, with the 2015 Cadillac ATS Coupe expected to launch with two available engines, two available transmissions and two drive configurations (rear- and all-wheel). More specifically, the standard powerplant is Cadillac's 2.0-liter, four-cylinder turbo that makes 272 hp and 295 lb.-ft. of torque, while the direct-injected 3.6-liter V6 can serve up outputs of 321 hp and 275 lb.-ft. of torque. Cogs are swapped via either a six-speed manual or automatic transmission.

Perhaps more importantly—and keeping in mind the mission of the 2015 Cadillac ATS Coupe—the standard car is less expensive, bigger, lighter and more powerful than a 2014 BMW 4 Series Coupe, but with one major drawback as compared to the Bimmer: There's no open-air version to compete with the 4 Series convertibles—at least not yet. 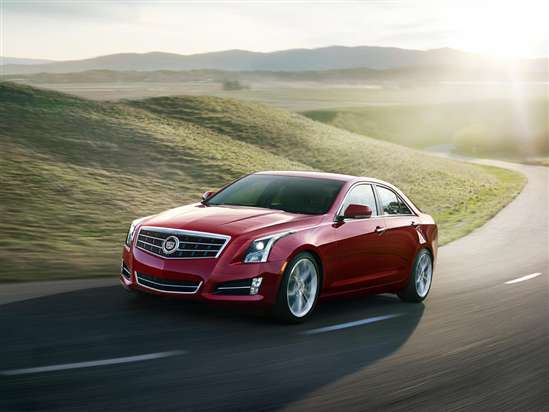