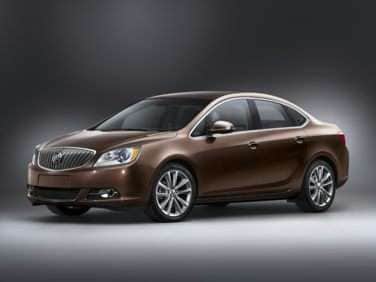 All About Buick Verano

Because of its tidy size, the temptation to gauge the small Buick against a performance yardstick is strong. And, quite frankly, the idea of a high performance Buick is not without precedent. However, given the marque’s more dominant longstanding penchant for quietness and luxury, one would be remiss in strictly evaluating the Verano solely in terms of speed and handling.

Think quiet, comfortable, and nicely equipped—in a size that should make it easy to live with in the city. Then, stir in a generous helping of handsome—along with a big dose of competence on the road. The result will be much closer to this Buick’s mission in life.

A wealth of tech is on offer too, largely controlled via the seven-inch touchscreen display in the center stack. Among the highlights are Bluetooth telephony and audio streaming. The latter is accomplished through a six-speaker sound system with a CD player, satellite radio, USB/iPod interfaces, an auxiliary audio input jack, and Buick's IntelliLink smartphone compatible connection system.

When it comes to convenience, the Verano’s feature-set is wholly competitive. Bluetooth phone and audio streaming are standard, as are an auxiliary input for an iPod, satellite radio, dual zone climate control, and keyless ignition. Leather upholstery is of course available, but the entry-level leatherette-with-cloth-inserts seat coverings are quite handsome as well.

Of course, if you’re one of those who absolutely HAS to have it all, the Buick Verano Turbo offers everything the standard Verano model offers, and delivers significantly better performance too. However, for most people, the standard Verano’s combination of upscale luxury features and city-friendly sizing will be a good match.

The base powertrain is a180-horsepower, direct-injected, 2.4-liter inline four-cylinder powerplant, capable of generating 171 ft-lbs of torque. A 2.0-liter turbocharged four, producing 250 horsepower and 260 ft-lbs of torque powers the Verano Turbo. A six-speed automatic transmission is the standard offering with both engines, while a six-speed manual is available as an option for the turbo.

The crisply styled Verano is both good-looking and easily capable of satisfying the 95 percent of the car-buying public valuing those attributes over outright performance. For those of you who prefer some get up with their go, there’s always the Verano Turbo.