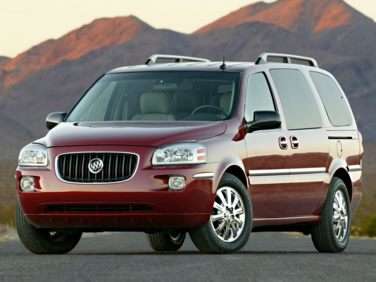 All About Buick Terraza

The Buick Terraza is four-door, seven-passenger minivan that was sold from 2005 through to 2007. Buick labeled this vehicle as a luxury crossover sport van. This was Buick’s first US marketed minivan and their most expensive. The Buick minivan came in three trims – the CX, CX Plus and CXL. Setting it apart from the competition was the long nose, taller frame and the availability of all-wheel drive.**** The original Buick Terraza entered the market with the one engine – a 3.5 L V6 engine that generated 200 horsepower. This vehicle was available with an all-wheel drive system. In 2006, a larger engine was offered as an option. This was the 3.9 L V6 engine offering 240 horsepower.

By 2007 the smaller engine was replaced with the larger one and this meant that the vehicle could no longer be offered with all-wheel drive, as the system couldn’t function with the heavier torque of the larger engine. In the last year of production, Buick brought out a flex-fuel variation.

The interior of the Buick Terraza has the roominess that you’d expect from a minivan and carries the expected seven passengers plus cargo. Both of the second and the third seats fold down to provide up to 137 cubic feet of cargo space. One feature this vehicle doesn’t have that consumers have come to expect is to have the third row of seating fold flat to the floor. It can be removed however. For the upscale trims, there is nice leather and wood trim to accentuate the comfortable interior.

There are several convenience features for the interior to make life easier. Included here are a modular ceiling system that allows passengers to adjust the DVD player. There are storage compartments and folding trays accessible between the first and second row of seating. Another convenience feature that is great in cold climates is the remote vehicle start that allows the vehicle to warm up before you have to get in.

When considering the Buick Terraza, realize that Buick considered this minivan a luxury vehicle - therefore it came nice packed with standard features. The CX trim came with StabiliTrak traction control, ABS, four-wheel disc brakes, and one year of OnStar. The CX Plus added in a sports-like suspension, two-zone climate control and an auto-leveling rear suspension system. When you step up to the top CXL trim, there are alloy wheels, air conditioning for the rear passengers, rear parking assist for backing up and even eight-way power front seats for the driver and the front passenger.

The rear DVD entertainment system became standard for the 2006 and 2007 models. One option available was the upgrade to PhatNoise digital media system.

The 2006 and 2007 models came standard with side airbags for the driver, front passenger and second row of seats, passenger airbag cutoff, and automatic locking retractors. Structural features included front and rear crumple zones, and side guard door beams. The Buick Terraza 2007 model received a ‘Good’ rating from the IIHS in the frontal offset crash tests. The vehicle also received an ‘acceptable’ rating when put through the side impact tests.