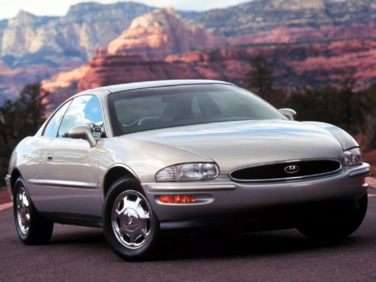 All About Buick Riviera

The Buick Riviera is a full-size sedan that was first introduced for the 1963 model year. The vehicle was the first to feature a 2-door pillarless hardtop design.

Following the 1999 model year, the Buick Riviera was discontinued with no direct successor. During its production run, the vehicle went through eight generations of body design. The final version of the vehicle competed with such full-size luxury sedans as the Cadillac Eldorado, Lincoln Continental Mark VIII and Ford Thunderbird.

The eighth and final generation of the Buick Riviera debuted in the 1995 model year. The new design was larger than the previous model, with a length that grew by nine inches and a width that grew by 1.9 inches. The vehicle's exterior also featured a much more rounded design, with sloping hood and oval fenders. The sedan's skeleton was based on the GM G-body platform, which was also used for the Oldsmobile Aurora.**** Overall dimensions for the Buick Riviera include a length of 207 inches, width of 75 inches and height of 55.2 inches.

A Buick Riviera concept car was unveiled at the 2007 Shanghai Auto Show. The American auto industry later got an up close look of the vehicle at the 2008 Detroit Auto Show. The design featured gullwing doors, carbon-fiber body panels and a 2x2 seating layout. While there are no current plans to mass produce the Buick Riviera Concept, the nameplate may follow the revival of the Buick Park Avenue and be reintroduced to international markets such as China.