Poised in front of the flat bottomed steering wheel in the refreshed 2014 Buick Regal GS, its close kinship to its Opel Insignia cousin is readily evident, as is the fact Buick is getting serious about offering a respectable luxury sports sedan. In fact, Buick’s promotional literature for the car refers to the Regal as “the athlete of the family”.

Of course, those familiar with the history of Buick know this is far from the first Buick Regal to come to market with a performance edge. In the late 1980s, Buick had a formidable run of turbocharged V6-powered Buick Regals, culminating in a 1987 Buick Regal GNX capable of outrunning the 1987 Corvette to 60 miles per hour and in the quarter mile.

Of course, these days, the performance parameters for American cars have broadened considerably. While that zero to 60 time is still quite relevant, so are slalom times, braking distances, steering feel, and cornering attitudes. In other words, these days, if you want your sport sedan product to be considered a hot car, you have to make sure its skill-set is just as much about handling and overall refinement as it is out and out acceleration. Cornering speeds and trap speeds are considered in the same breath as acceleration times and top speed. What’s more, if we’re looking in the contemporary luxury sport sedan category, equipment, fit, finish, and comfort rank highly as well.

In other words, these days, if you want your luxury sport sedan to be taken seriously, it’s all about the overall execution of the entire package. It is into this environment, the 2014 Buick Regal GS steps, as it thrusts the venerable Buick nameplate into what is a totally unexpected role (as far as most current sport sedan intenders are concerned) for the marque. The good news is the Buick goes a long way toward being satisfying in a number of areas and is quite competitive in still others.

The bad news is it still has a bit of yardage to make up in one place too.

What, where, and how?

Standard features for the 2014 Buick Regal GS include the Buick IntelliLink Radio with integrated navigation, Bluetooth streaming for audio and handsfree phone operation and a nine-speaker Bose amplification system. Satellite radio is included as well, with a three-month free trial.

The front sport seats are power adjustable, trimmed in leather, and heated. The steering wheel is heated as well, wrapped in leather, and is manually adjustable for tilt and telescoping. Two eight-inch monitor displays are fitted. One in the instrument panel, and the other in the center stack. The instrument panel monitor is reconfigurable and contains the speedometer and the tachometer, as well as status information regarding other engine related functions. The center stack monitor provides readouts for the audio system, the climate system, the navigation system, and the communications system.

Keyless entry and start, as well as remote start, are also standard fare, along with cruise control, dual-zone automatic climate control, a pair of DC power outlets, and a 12-volt AC power outlet.

For 2014, the Regal’s face has been reworked to incorporate new headlamps and a revised version of the traditional Buick waterfall grille. Speaking of the headlamps, Buick is offering them in either halogen or Xenon for Regal models in general, although the GS gets Xenon as standard equipment. LED daytime running lamps are featured as well.

The GS gets a lowered ride height than standard Regal models, which serves to make it look even more aggressive.

At the rear, a tail spoiler has been integrated into the trunk lid, LED taillights add a distinctive appearance, and a chrome bar spans the trunklid tying the taillamps into the overall design. Chrome exhaust outlets, exaggerated in size, emphasize the sporting aspirations of the Regal GS.

The main changes to the interior are the instrument panel and the center stack. The incorporation of the aforementioned eight-inch monitors does much to add interest, as well as a significant air of athleticism to the interior treatment. Serving as the perfect stylistic punctuation is the new flat-bottomed steering wheel with its multifunction control buttons. And, while the monitors up the tech quotient considerably in terms of appearance, overall complexity of the secondary controls has been reduced. Where the previous Regal’s audio system had 17 buttons on the center stack, the new one has seven.

Our first drive experience saw us drive the Regal GS some 100 miles. Over that distance we can report the sport seats are firm, comfortable, and adept at supporting the body over longer distances. Further, they do a good job of holding occupants in place during vigorous cornering maneuvers. The rear seats can be shy of legroom, if the front seat occupants are feel selfish, but if mutually assured comfort is considered, the Regal GS will seat four comfortably over a reasonable distance.

The interior has a rich ambiance, with soft touch materials and pleasant shapes. You can see some thought and consideration was given to the way it would play and so it does—quite well. A full array of map pockets, door bins, and cupholders are all present and accounted for—along with a generous glove box and center console storage. At 14.2 cubic feet, the trunk of the 2014 Buick Regal GS is reasonably sized—if not exactly cavernous.

Long story short, it’s a Buick by every measure in the comfort department.

As is to be expected, the 2014 Buick Regal GS incorporates all of the usual entities when it comes to the basic outfit of safety kit. Amenities include: six standard air bags (order the optional rear-seat thorax air bags and you’ll bring the total to eight). Other features include a rear-vision camera, StabiliTrak, traction control, and four-wheel disc brakes with ABS and Intelligent Brake Assist. Front and Rear Park Assist is also a standard feature on Regal GS.

By the way, all of these are new features for the 2014 Buick Regal.

Previous iterations of this generation Regal model have been named top safety picks by the Insurance Institute for Highway Safety. With the new intelligent features, we can only assume the Regal will offer more protection than ever before.

Powering the 2014 Buick Regal GS is a 2.0-liter turbocharged four-cylinder engine producing 259 horsepower and 295 ft-lbs of torque. The engine has been calibrated to deliver as much as 260 ft-lbs of that torque output at 1,700 RPM.

The turbo is a twin-scroll design to minimize turbo lag and improve engine response. Providing further assistance in this endeavor is a pressure activated wastegate and an electronic bypass valve. The turbocharger is capable of providing up to 24 PSI of boost. Also employed are high-pressure direct fuel injection and variable valve timing with dual camshafts.

Regal GS is available with front-drive and all-wheel drive. Front drive models can be had with either a six-speed manual transmission, or a six-speed automatic. The six-speed automatic is the only transmission offering for all-wheel drive configured Regal GS models. Speaking of that all-wheel drive system, it is equipped with a Haldex limited slip differential. This endows it with the ability to automatically vary torque distribution selectively to the wheel (or wheels) with the most grip. It can also be configured to optimize high performance operation when the GS button on the dash is pressed. This has a profound effect on the handling of the 2014 Buick Regal GS.

The GS button also alters the responsiveness of the shocks, the steering, and transmission to optimize performance. The Regal GS engineering team chose to leave throttle response out of that equation however—citing the risk of perceived twitchiness. A mistake in our estimation, but maybe they know their customer better than we do.

Similarly, they chose not to offer paddle shifters with the six-speed automatic, citing a litany of reasons—but we think it really came down to they were trying to keep the Regal GS at a certain price point, so some features had to be sacrificed to the bean counters.

Steady state driving in the 2014 Regal GS is remarkably quiet, smooth, and just plain refined. The car absorbs pavement abnormalities with considerable deftness, while exhibiting outstanding directional stability. And here is where our European sport sedan prejudice is going to show. In any of the cars from the established sport sedan manufacturers, we’d have stopped paying attention to the car and just drove. But because we were piloting a Buick, we paid close attention to every little nuance of the Regal’s behavior.

In other words, where normally, when we’re driving a really good car we let it disappear around us and we just enjoy the drive, because we were driving a car without an established reputation for prowess in the regard we were hypersensitive to its ministrations. Happily, this left us even more impressed. The 2014 Buick Regal GS is one seriously nice piece.

Taking things up a notch and delving into the performance potential of the Buick, we noted the steering effort was just right (with the GS button activated), turn-in to corners was nice and crisp, and body roll was all but no existent. We were in a new car on unfamiliar roads with a lot of blind crests, so we didn’t go all out like we might’ve in more familiar surroundings. But still, we saw enough to comfortably say the 2014 Buick Regal GS is a very entertaining car to drive quickly.

We did find fault with the throttle response of automatic transmission equipped models. The first few inches of pedal travel would net no increase in acceleration for a moment or two. We asked, and were told this had to do with the calibration of the transmission to ensure smooth operation. Felt like turbo lag to us, bit we were assured by the engineering team this was not the case.

In this, the 2014 Buick Regal GS, there is finally an American sport sedan we feel is favorably comparable to an Audi A4, BMW 3 Series, or Mercedes C Class. Not their equivalent, mind you—but pretty close. At several junctures during our day of driving, we were pleasantly surprised to realize we really could live with the 2014 Buick Regal GS.

Given our proclivity for responsiveness, sophistication, and pleasant esthetics, this speaks well to what Buick has accomplished with the 2014 Regal GS. The car is good looking, handles nicely, is well equipped and handles beautifully.

If they could just fix that throttle issue, we’d be absolutely set. 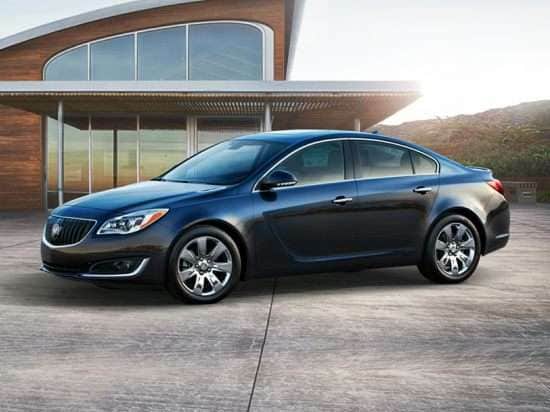