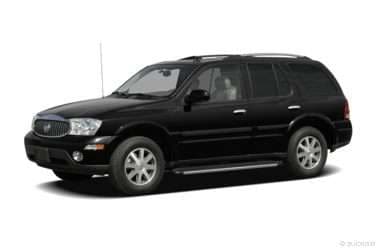 All About Buick Rainier

The Buick Rainier is a mid-size SUV that originally debuted for the 2004 model year. The vehicle was discontinued after the 2007 model year and replaced by the Buick Enclave crossover. During its 4-year lifespan, the Rainier received only minor changes. The 4-door SUV competed directly with competitor vehicles such as the Honda Pilot, Nissan Murano and GMC Acadia.

The Buick Rainier boasted the first body-on-frame construction on a Buick vehicle since the 1920s. The SUV was built on the GMT360 platform, which has also been used on other GM vehicles such as the Chevrolet TrailBlazer, Chevrolet SSR, GMC Envoy, Isuzu Ascender, Oldsmobile Bravada and Saab 9-7X. The vehicle shares numerous cosmetic features with these cars as well. In fact, the Rainier is essentially a clone of the Oldsmobile Bravada with a redesigned Buick front end.

In relation to other GM SUVs, the Rainier is intended to be the most upscale and luxurious model. The vehicle was only available in a 2-row, 5-passenger configuration. Overall dimensions include a length of 193.4 inches, width of 75.4 inches and height of 71.9 inches. The high stance of the vehicle has been attributed as one of the causes for poor handling that has been a complaint of expert reviewers. Inside, the roomy Buick Rainier cabin offers 43.7 cubic feet of cargo capacity when the seats are up. With the rear seat folded flat, the SUV offers 80.1 cubic feet of storage space.

The Buick Rainier featured two engine options. A 4.2-liter DOHC 6-cylinder engine came standard and delivered 291 horsepower and 277 lb-ft. of torque (as of the 2006 model year.) An optional 5.3-liter OHV V8 engine with Active Fuel Management boasted 300 horsepower and 330 lb-ft. of torque. Both engines were paired with a 4-speed automatic transmission that offered EPA-estimated fuel economy of 15 mpg in the city and 21 mpg on the highway. Other notable performance features available on the Rainier included all-wheel drive and a load-leveling suspension.

Standard safety features on the Buick Rainier included antilock brakes, traction control, stability control and front airbags. Front side airbags were available as an optional upgrade. In NHTSA crash tests, the Buick Rainier SUV performed marginally. Three out of five stars were awarded in the category of driver's side protection. A 4-star rating was awarded in the category of passenger side impact.

As with most Buick vehicles, the Rainier retains a relatively low resale value. This may make it a good deal for drivers looking for a luxury-oriented SUV. A used 2007 Buick Rainier is estimated to come with a price tag between $18,500 and $20,000 depending on condition. Known mechanical issues that have affected the operability of the Rainier include a faulty turn signal flasher, inaccurate OnStar global positioning, inaccurate fuel gauge, water leaks and inoperable taillights and brake lights.