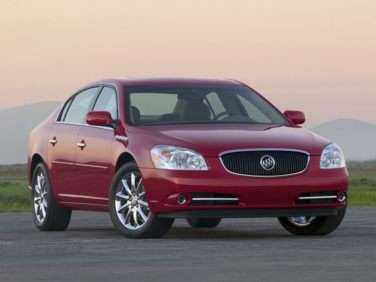 All About Buick Lucerne

The interior offers loads of room, a luxurious front and back and the same Quiet Tuning aspects as the Buick LaCrosse. This means everything from the pad under the carpet to the double laminated windshield and even the design of the windshield wipers make this vehicle one of the quietest on the market. It’s also one of the smoothest to ride in with its soft suspension tuning.

Under the hood of the 2008 CX model is a 3.8 L V6 producing 197 horsepower. Buyers can upgrade to the 4.6 L Northstar V8 with 275 horsepower and 295 lb-ft of torque as an option on the CXL. It’s standard on the CXS trim. With the Super the same engine is tuned to offer 292 horsepower and 288 lb-ft of torque. Paired with both engines comes a four speed automatic transmission with overdrive. For 2009, the CX1 comes with a 3.9 L V6 flex fuel engine that produces 227 hp and comes paired to the same four speed automatic transmission. When running on gasoline, the vehicle achieves an EPA fuel economy rating of 17 mpg in the city and 26 mpg on the highway.

The interior of the vehicle is roomy and clean with simple controls. It doesn’t have the same luxurious feel as others in its class but you are getting a solid vehicle with smooth performance and drivability.

Although not as innovative nor as chock full of technological advanced features as many other vehicles of its class, the Buick Lucerne does offer a few surprises. One of these is the heated washer fluid to stop the windshield wipers from freezing to the glass in the winter.

Basic safety features include anti-lock disc brakes, front seat side airbags, stability control, traction control and antilock disc brakes. There is a blind-spot alert system available. This warns the driver when another vehicle enters the driver’s blind spot. Dual depth front airbags is another new and unusual feature that you wouldn’t expect to find on the Lucerne. These airbags have the capability of deploying in two sizes. This minimizes injury to smaller drivers and passengers. They have built in sensors that monitor the severity of the crash, the weight of the driver and front passenger, whether the seatbelt is engaged and how the seat is positioned to figure out the best inflation size of the airbag.