What is a Buick? If a Chevrolet is mainstream, and a Cadillac is luxury, where does Buick fit into the General Motors hierarchy of brands? And if a loaded Chevrolet Impala costs just under $43,000 and a Cadillac XTS without any options has a sticker price of just over $45,000, where does the 2014 Buick LaCrosse fit into the full-size sedan picture? Evidently, the idea is for the Buick to overlap with the Chevy and the Caddy, delivering more luxury than the Impala and at a greater value than the XTS.

You’d think this formula would make the Buick the most appealing of this trio of full-size sedans. Having now spent a week driving a nicely equipped LaCrosse, I’m not sure that’s the case. I mean, this is a nice car that deserves more consideration than it gets, and the LaCrosse is quite stylish inside and out. Without benefit of driving them back-to-back, my gut tells me I’d rather have the Buick than the Cadillac.

The problem is that a loaded Chevy Impala LTZ with all the upgrades is a terrific car. And that makes the Buick a tough sell.

2014 Buick LaCrosse Review and Quick Spin: About Our Test Car

2014 Buick LaCrosse Review and Quick Spin: About Our Test Car

The least expensive version of a 2014 Buick LaCrosse starts at $34,460*, about $2,500 below a nicely equipped Impala 2LT with all the upgrades. Buick buyers can upgrade the LaCrosse with a Leather Group, a Premium I Group, or a Premium II Group.

My test car had the Premium I Group, offered only with a V-6 engine. It adds perforated leather, ventilated front seats, a power rear window sunshade, an 11-speaker Bose Centerpoint premium audio system, a real-time continuously damping suspension with a Sport mode, and chrome 19-inch aluminum wheels. To this, Buick added a couple of Driver Confidence option packages containing lots of safety-related technologies, a power sunroof with a rear skylight, a navigation system, and White Diamond Tricoat paint, for a grand total of $46,990*.

What my test car did not have was the Premium II Group. This upgrade essentially adds 20-inch wheels and a standard navigation system, but nothing more.

* Prices include a destination charge of $925

For 2014, the Buick LaCrosse receives styling changes and new wheel designs that collectively add additional character to the car. From the larger grille and new wing-shaped lighting elements to the restyled wheel selections, the new LaCrosse looks bold and elegant at the same time, especially when equipped with the new bi-Xenon articulating headlights with LED running lights.

The key to making a LaCrosse look good is the wheel selection. The base model has skinny little 17-inch wheels that make this Buick look fat, in the same way that wearing a Speedo at the beach would impact my own visual appeal. Depending on equipment, though, buyers can upgrade to 18-inch, 19-inch, and 20-inch wheels that serve to improve the Buick’s beauty.

My test car had a Choccachino/Cocoa color combination resembling my favorite candy (Reese’s). The colors are fine, but I think they need to be reversed in order to cut down on sun glare. The fake Phantasm wood trim sure was different, but I think I’d get tired of it pretty fast. And I’m not a fan of ice blue contrast stitching on anything.

It sure is easy to get into or out of the Buick LaCrosse. This car sits unusually high off the ground, and by extension so do the seats. Once inside, though, I can’t say I’m happy, despite the fact that Buick says it has installed new seats that are “more comfortable” for 2014.

Granted, I’m a big guy, but that could be said for many members of this Buick’s target audience. To me, the seat is too narrow, the cushion is too short, the padding is too hard, the bolstering is too weak, and the head restraint feels like a block of concrete. The wide range of seat adjustment sure helps, though, and the steering wheel is terrific to hold.

The back seat is the better place to be, but it’s not perfect. Long doors make it easy to get into and out of this car, the LaCrosse provides tons of legroom, and air vents supply warm or cool air to rear-seat occupants. The seat itself is comfy, too, and my test car had a power rear window sunshade.

However, as is the case up front, the rear head restraints are too hard. Here’s another oddity: the short center armrest has exposed plastic cup holders located right where my elbow hopes to find a plush place to rest. Plus, for a premium car built by a company based in Detroit, the lack of a heated rear seat option is glaring. Buick could certainly do better.

The LaCrosse’s trunk needs to be larger, too. This is a sizable car, one clearly suited for epic road trips, but the trunk measures just 10.8 cu.-ft. for the models equipped with the standard eAssist mild hybrid powertrain. Upgrade to the V-6 engine, and the trunk grows to 13.3 cu.-ft. To put this into perspective, the compact Buick Verano’s trunk is bigger. Additionally, the trunk opening is fairly small and the liftover height is relatively high.

From a packaging and exterior styling standpoint, I prefer the Chevy Impala to the Buick LaCrosse. But the Buick sure has a stylish-looking interior. It is different, something to make this car special, and the new 8-inch digital instrumentation display is terrific. I also find this Buick relatively simple to understand and operate, and the touch-sensitive aspects of the cabin are actually sensitive to my touch.

Still, there are questionable choices here. The recesses behind the door releases are small, and it seems to me that fashionable ladies might break a nail while using them to exit the car. Storage space is at a premium, too. The cup holders and forward storage bin are unlined, adding the potential for noise, vibration, and harshness in the LaCrosse’s QuietTuned cabin. I also noticed that to the left of the digital instrument screen there is an analog tachometer. Really?

Buick’s next-generation IntelliLink system is available for the LaCrosse, featuring a new 8-inch color touchscreen display with swipe and drag capability. The new system features natural voice recognition, new icons, and updated customization capabilities. I find IntelliLink fairly easy to use, though if you sit low in the LaCrosse it might be awkward to see and access certain screen functions.

New capacitive-touch climate controls debut for 2014, too, and I had no trouble operating them, though I still prefer some kind of tactile or aural confirmation that they’re actually responding. A rear-seat entertainment system is available as an option, including two flip-up display screens and a Blue Ray DVD player. If the car’s trunk were larger, I’m sure lots of families would find this feature compelling.

Standard safety equipment for the 2014 LaCrosse includes the usual suspects, plus OnStar telematics with six free months of Automatic Crash Response and other safety-related services. A reversing camera, however, is optional for this nearly $35,000 automobile*.

My test car included the Driver Confidence Package 1 ($2,125), which includes Side Blind Zone Alert, Lane Departure Warning with Lane Change Alert, Forward Collision Alert, Rear Cross Traffic Alert, articulating bi-Xenon headlights, and a Head Up Display. Each of these systems works brilliantly in terms of sensitivity levels and how they warn the driver of potential danger, and if you don’t want the Lane Departure Warning system on, a big button on the dashboard turns it off.

The Driver Confidence Package 2 ($1,745) contains a Safety Alert Seat that really ought to be added to the package listed above. It vibrates to warn the driver, a preferable method to loud, startling chimes. This package’s full-speed range Adaptive Cruise Control works well, suffering only a couple of bouts of confusion on winding Pacific Coast Highway, and I’m glad that the only other autonomous safety feature on this car comes in the form of a Collision Preparation with Collision Mitigation Braking system.

If you can’t avoid a collision, the LaCrosse boasts excellent crash-test ratings from the National Highway Traffic Safety Administration. The Insurance Institute for Highway Safety has not conducted full testing for the LaCrosse, but the car receives the top rating of ‘Good’ in the moderate overlap, roof crush strength, and rear impact protection tests.

* To be fair to Buick, a reversing camera is standard for the 2015 LaCrosse

Given the LaCrosse’s hefty 3,757-lb. base curb weight, you might want to skip the standard 182-horsepower, eAssist mild hybrid powertrain in favor of the optional 304-horsepower, 3.6-liter V-6. The penalty for doing so, of course, is a dramatic reduction in fuel economy. I averaged 19 mpg on my test loop, short of the EPA’s official combined-driving estimate of 21 mpg. The V-6 doesn’t feel particularly strong, either, but noise is far removed from the car’s QuietTuned cabin.

Apparently, Buick thinks that people choosing Premium I or Premium II trim might use the LaCrosse as a sport sedan. My test car included a set of 19-inch aluminum wheels, a real-time damping suspension with a Sport mode, and bigger brakes. Surprisingly, these changes transform the LaCrosse into a decent handling car. Traditional Buick buyers should consider themselves warned, though: With these components, the LaCrosse doesn’t adhere to Buick’s traditional ‘float-and-glide’ ride quality tenets.

Here’s another surprise. The 6-speed automatic transmission has a Sport mode, and it automatically holds a gear when software detects spirited driving. As a result, the LaCrosse demonstrates unexpected athleticism on a favorite back road. However, despite the transmission’s ability to rev-match on downshifts, the LaCrosse isn’t a serious sports sedan. How could it be, with a thumb-activated rocker switch for making manual gear changes?

The LaCrosse is also equipped with variable assist electric steering that loads up off-center, getting progressively heavier as the car goes faster. Not too quick, not too slow, the steering is usually satisfying and the smooth leather-wrapped steering wheel is nice to grip. On the highway, wind noise is well quelled, but road noise, whether the roar from granular surfaces, the thwack from cracks in the road, or the rumble from patched pavement, is louder than expected.

Dynamically, the weak link is the braking system. The pedal doesn’t feel particularly responsive or communicative, and I found it somewhat difficult to bring the big Buick to a clean, jostle-free stop in traffic. Plus, during a rousing run across the mountains, they faded on a cool, 68-degree day.

Though stylish, roomy, and safe, the 2014 Buick LaCrosse can’t match a Chevrolet Impala when it comes to comfort, trunk space, or value. Then again, the Buick offers exclusives such as a hybrid powertrain, all-wheel drive, the new Ultra Luxury Package, and other upgrades that aren’t available for the Chevy, and which represent real value compared to a Cadillac XTS.

In my opinion, the LaCrosse’s uncomfortable seats, tiny trunk, and lack of attention to certain details represent the real barriers to serious consideration. It is time for the LaCrosse to be redesigned, not refreshed.

Buick provided the 2014 LaCrosse for this review 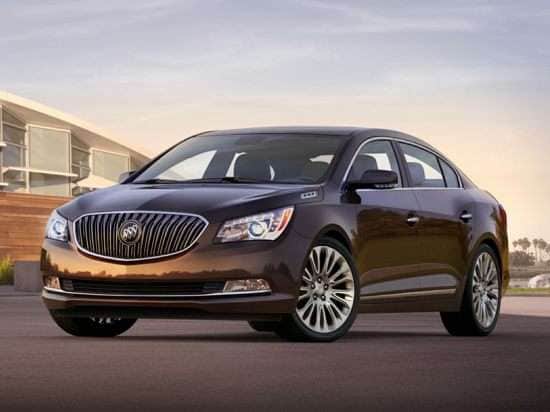