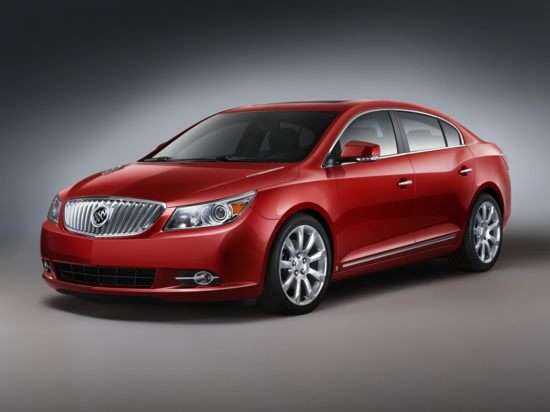 As bad as 2008 was for the automotive industry, 2009 is looking quite upbeat for General Motors. Emergency life support loans aside, if the recent vehicle trend at GM is any indication of thing to come, the future (at least for Chevrolet, Cadillac and Buick) couldn’t be any brighter. While the Enclave luxury crossover managed to attract newer and younger customers onto Buick showrooms, the LaCrosse left much to be desired when it launched in 2005. Building on the recent success of the Chevrolet Malibu and Cadillac CTS, the 2010 Buick LaCrosse is yet another spectacular example of GM’s design capabilities.

Not one aspect of the new LaCrosse was left untouched giving the new sedan a breathtaking design, a spacious and luxurious interior as well as a new pair of engine options that should help give the car a fighting chance against midsize luxury powerhouses such as the Lexus ES, Acura TL and Lincoln MKS. The new LaCrosse will launch with three trim levels – CX, CXL and CXS – and it will go on sale this summer priced under the 2009 Lucerne that starts out at $30,030. The 2010 LaCrosse will be produced in Kansas City, Kansas alongside the Chevrolet Malibu and Saturn Aura.

The styling of the new LaCrosse starts with the prominent Buick-signature grille. From there, a multidimensional crease flows back from the grille and twists along the side of the hood and down the side before blending into the large chrome-trimmed, LED taillights. The side crease and beltline combine to form a unique identity for the new LaCrosse. Chrome trim around the window openings, taillight and across the center of the decklid provide an upscale look as do the boat tail crease in the rear bumper and the integrated dual exhaust outlets. Such fine attention to detail is apparent in the fact that the clearance between the exhaust ports and the rear bumper fascia is just 3 millimeters. Up front, large headlights provide a menacing look and a soft line for the hood to follow. Normally mounted on the front fenders, the 2010 LaCrosse continues to use Buick’s signature port holes but they are now mounted atop the hood. In profile, the LaCrosse has a noticeably swept roofline giving the car a fastback look similar to many four-door coupes.

Like many new GM cars, inside is where the LaCrosse truly shines. The highlight of the cabin is the two-tone, multi-layered look used on the instrument panel that flows seemingly uninterrupted into the door panels. A large touch-screen navigation system sits at the top of the center stack, which gracefully flows back into the center console with a combination of real wood inlays flanked and bright silver trim. All major controls for the navigations system and HVAC are easy to use and easy to distinguish.. Finishing off the inviting atmosphere, the new Lacrosse also features cool blue ambient lighting in the instrument panel, center console and door panels. Even small details such as the handcrafted, hand-stitched instrument gauge hood show just how determined Buick was to become a major player among entry-level luxury sedans.

Replacing the antiquated 3.8-liter V-6, two all-new engines further add to the refinement of the 2010 LaCrosse. No V-8-powered LaCrosse Super is planned for 2010, but the larger V-6 found in the LaCrosse CXS has an output close to the outgoing V-8 model with slightly improved fuel economy. Buick estimates a 0-60 time for the CXS to be 6.9 seconds. The midlevel LaCrosse CXL can now be equipped with the same Haldex all-wheel drive system as the Saab Turbo X. This system can send up to 85 percent of the engine torque to the rear wheels for increased handling, performance and safety.