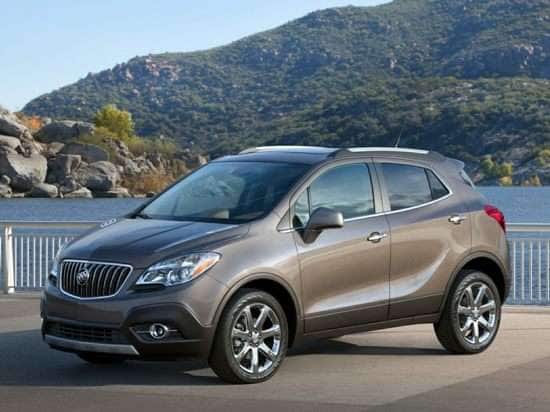 Changes for the 2014 Buick Encore:

The 2014 Buick Encore is a small, upscale crossover SUV sold with standard equipment and a choice between Convenience, Leather, and Premium option packages.

Additional options include chrome wheels, a navigation system, and a power sunroof.

The standard Encore is rated to get 28 mpg in combined driving. With AWD, the rating drops to 26 mpg.

The Insurance Institute for Highway Safety (IIHS) has not finalized Encore crash-test ratings as this summary is written. Last year, the 2013 model received the highest rating of “Good” in all assessments except the new small overlap frontal impact test, in which the Encore received a “Poor” rating.

Bose Active Noise Cancellation is standard for the Encore, using ceiling mounted microphones to detect audible engine noise and then generate counteracting sound waves through the sound system to “cancel” the noise.

OnStar telematics with Advanced Crash Response service is also standard, along with IntelliLink technology with Internet radio access, text-messaging capability, and, for iPhone users, Siri Eyes Free. Tune Select is included with the satellite radio service, allowing Encore owners to tag songs or artists and receive a notification when that song or artist is playing on any satellite radio station