What is it like to be in a class of one? Well Buick is finding out with the introduction of the new Encore crossover. It's Buick’s smallest crossover and really doesn’t have any direct competition. The Encore has many of Buick’s design cues used throughout the body. There is the large grille that is flanked by jewel-like headlights in the front. Also on the front are a set of portholes along the hood. The back of the Encore features sculpted taillights and a chrome tipped exhaust. You have the choice between eighteen-inch aluminum or optional chrome wheels. Inside, the Encore features Buick’s QuietTuning which means a very quiet ride. Buick also made sure the Encore has a number storage spaces throughout the interior, meaning you can put stuff in different places without it sliding all over the place.

Power comes from 1.4L turbocharged four-cylinder producing 138 horsepower and 148 pound-feet of torque. Your sole transmission choice is a six-speed automatic transmission, but you do get the choice of either front or all-wheel drive. The EPA rates the Encore at 25 City/33 Highway/28 Combined for the front-wheel Encore and 23 City/30 Highway/26 Combined for the all-wheel drive Encore. Pricing for the 2013 Buick Encore starts at $24,950 for the base model and don’t think you're getting a bare bones model. The base model gets Buick’s IntellLink infotainment system, Bluetooth, USB, back-up camera, six months of OnStar, and ten airbags. Next up in the Encore lineup is the Convenience package which adds remote start, dual-zone climate control, and 120-volt power outlet on the rear console. The Encore Convenience will set you back $25,010. After the Convenience is the Encore Leather which starts at $26,710 and adds leather seats, heated seats and steering wheel, and six-way power adjustments for the passenger seat.

Finally, there is the Encore Luxury and that adds a Bose audio system, front and rear park assist, rain-sensing wipers, lane departure warning, and forward collision alert. The Luxury will set you back $28,190. All-wheel drive is available on all models for only $1,500. Even though the Buick Encore doesn’t really have any direct competition, we think the MINI Countryman, Nissan Juke, and Volkswagen Tiguan are the closest. 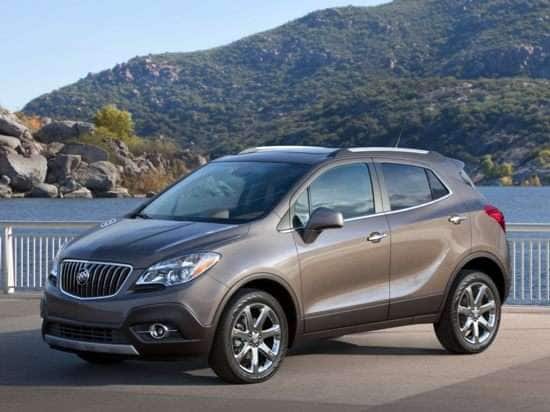