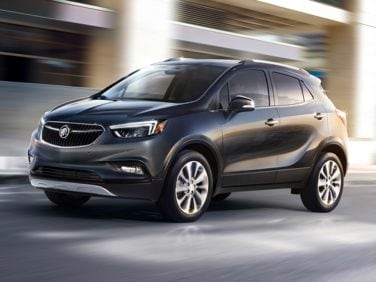 All About Buick Encore

The Buick Encore is a small luxury crossover that was unveiled at the North American International Auto Show in Detroit in January of 2012 and went on sale in the United States a year later. The Buick Encore is one of the products of the global Buick, Opel and Vauxhall rebadging arrangements, in which the same car is sold around the world under different monikers. The Encore name is exclusive to the United States, where Buick is a domestic automaker, and China, where Buick is one of the most popular brands. Elsewhere in the world, the Encore is sold under the Opel Mokka and Vauxhall Mokka names. The cars are built in General Motors plants in South Korea, China, and Spain.

The Buick Encore is rather small for a vehicle of its type. It is smaller than its competition in the crossover class, it has a shorter wheelbase than any other Buick vehicle in recent memory, and it features an especially small engine, just 1.4 liters. Thus, the Encore represents a dramatic shift in Buick’s overall strategy, since the brand was known for making large, comfortable vehicles that appealed to an older demographic. They didn’t need to be especially nimble or particularly fast. But since the Buick brand survived General Motors’ dramatic restructuring, Buick needed to become more competitive, and the Encore is its first effort in that direction.

Though the Encore’s powertrain might not have the volume that a lot of people expect from a crossover, the addition of a turbocharger helps somewhat. The modest engine produces just 138 horsepower, which means the Encore is nowhere near the fastest top speed or the quickest acceleration in its class. However, the Encore has a responsive six-speed automatic transmission, which is a good match for its engine, and the combination results in about 33 miles per gallon on the highway for front-wheel-drive Encores. There is an all-wheel-drive version of the Encore available, too, and gas mileage suffers by a few mpgs when this option’s selected.

The Encore’s interior and features have been stepped up from Buicks of the past, to better reflect the brand’s renewed focus. The cabin is still quiet and comfortable, so if any of Buick’s long-time fans give the Encore a chance, they won’t be disappointed. The cabin is smaller than much of the Encore’s competition; many crossovers offer third-row seating to appeal to large families, yet the Encore can seat just five, and it’ll be a tight fit. High end technological features include a Bose stereo with active noise cancellation that reduces unpleasant engine whining throughout the cabin, as well as a variety of satellite and Internet radio technology, smartphone integration, and rearview cameras. Fit and finish are an improvement over standard General Motors fare, too, to better compete with the standard in small luxury crossovers.