Lots of people like the Buick Enclave, a conclusion supported by the fact that well over 50,000 of them are sold every year, which in turn means that lots of Buick dealers like the Enclave, too. Just recently, a former colleague of mine who owns a Mercedes-Benz ML350 reached out to ask questions about the Enclave, which she thought looked terrific and about which she’d heard good things. I did not dissuade her from considering Buick’s big luxury crossover suv, but I definitely recommended some alternatives.

As is true of many consumers in the market for a new vehicle, my acquaintance was already set on buying the Enclave. She wanted a big, stylish, luxurious crossover SUV that would be more dependable than her Benz, and she loved the way the Buick looked. At that point, all I could do was to recommend a thorough test drive.

Since it had been several years since my own Buick Enclave test drive, and because the 2013 Enclave is updated with new styling and technology, I figured it was time to spend some quality time with this model, schlepping the family, running errands, and taking a rousing run across the Santa Monica Mountains and up the California coastline.

As it turns out, I should have pushed harder in convincing my former co-worker to sample the Acura MDX, Dodge Durango Citadel, Ford Flex Titanium, Honda Pilot Touring, and Infiniti JX35 (or QX60, as it will be known in 2014).

Buick has done away with trim levels in recent years, offering models with option “groups,” in the Enclave’s case called Convenience, Leather, and Premium. Prices start at $39,340 with front-wheel drive, with all-wheel-drive models commanding a $2,000 price premium. A 2013 Enclave with all-wheel drive and the Premium Group is priced at $48,520, and that’s what Buick provided to me for evaluation, painted Mocha Bronze Metallic with a Choccachino leather interior.

What is this, a Starbucks?

To this base price, my test vehicle had a dual-panel power sunroof ($1,400) and a Color Touch infotainment system with navigation, HD Radio, satellite radio, Bose audio components, and Buick IntelliLink smartphone pairing technology ($2,240). The final sticker price was $52,160.

Looking at the 2013 Buick Enclave, it might be hard to immediately discern the changes to the vehicle, but the entire front end is redesigned from the windshield forward, resulting in a sharper and crisper appearance. A new, more robust grille, standard Xenon headlights equipped with blue translucent halo rings, LED front running lights and taillights, and revised exterior trim details serve to give the new Enclave a more upscale and tailored appearance.

Inside, the upper portions of the dashboard and door panels get a padded insert with exposed stitching that is, I assume, designed to mimic an extended leather treatment. All Enclaves have a wood-and-leather steering wheel, plenty of simulated wood trim, and chrome accents for a glitzy appearance. Our test model’s perforated Nuance leather was soft, supple, and appealing.

Unfortunately, the veneer of luxury is a thin one, and it is all too easy to spot where Buick pinches pennies to preserve profits. For example, the plastic used for the lower parts of the dashboard, the door panels, and the center console would be acceptable in a Chevy Sonic or Cruze, but in a luxury suv which sells for more than $50,000 in loaded trim, it simply doesn’t make the grade.

I also think Buick needs to fire a supplier. Blue ambient lighting strips are new for 2013, wrapping from door to door under the windshield. The ones in our test vehicle displayed all the consistency and quality of a child’s $5 glow stick bought at a traveling carnival, serving as a constant suggestion that the Enclave is overpriced. At night, anyway.

The Buick Enclave is an 8-passenger SUV with three rows of seats and up to 115.2 cu.-ft. of cargo space with the second- and third-row seats folded flat. It is a full-size vehicle, bigger and more accommodating inside than a Chevy Tahoe or GMC Yukon, which makes its lack of comfortable seating all the more perplexing.

Granted, I am not the smallest of men. My wife kindly refers to my physique as “broad-shouldered” when perhaps “broad-bellied” is more appropriate. A big, roomy SUV like a Buick Enclave should, therefore, serve as a QuietTuned sanctuary from the world outside, a place where I can sink into plush leather seats and let the stress of the day ebb away.

Instead, I feel like I’m sitting on the tiny little chairs at my daughter’s pre-school. Ones covered in leather.

Both front seats feel like they’re a size too small, and I sit on them rather than in them. The 8-way power driver’s seat is difficult to position so that I get the right amount of height and thigh support, and comfort is further elusive due to a power tilt/telescopic steering wheel that doesn’t tilt high enough to offer a clear view of the instrumentation. As a result, I am forced to sit lower in the Enclave than I would prefer.

Additionally, when leaning back in the our test vehicle’s driver’s seat, something inside sounded loose and flexible, like it might break sooner than later. Smack a cardboard box, and you’ll get a sense of what I heard. On a positive note, generous front seat track travel provides lots of room for tall people.

Our test vehicle had second-row captain’s chairs, referred to as SmartSlide seats by Buick marketers, who promise that the design “requires just one hand” to operate. Sure. Maybe if you’re Wladimir Klitschko. Not only did I need to use two hands, but I also had to shove the seats forward to gain clearance to the third-row seat.

The effort, as it turned out, proved the third-row seat comfortable only for children. Space for legs and feet is tight, and placing three people on the thinly padded bench is optimistic unless their ages are in the single digits. While it is true that the SmartSlide second-row seats can be adjusted forward to create additional legroom, because second-row legroom is already snug, that serves no purpose other than to make up to five people unhappy rather than just two or three.

Cargo space is certainly generous, and I think the Buick Enclave is best purchased with a 3-passenger second-row bench seat and best used with the third-row seat folded all of the time, which then provides 68.9 cu.-ft. of cargo volume at the same time as room for up to five people.

Buick’s new Color Touch infotainment system and its surrounding touch-capacitive controls are more intuitive than those in the latest Cadillac models, and they confirm touch recognition with a satisfying audible click, but at times they remain equally as frustrating to use.

During my week with the Enclave, the weather in Southern California was cold and, on several days, dry with low humidity, producing similar conditions for the skin on my hands. Guess what? Touchscreens don’t really respond to cold, dry fingertips.

Plus, because the Enclave’s touchscreen is recessed into the dashboard, my big, cold, dry, stubby fingers had trouble activating the virtual buttons located on the screen’s edges. And since the screen is surrounded by touch-sensitive controls, it was really easy to accidentally activate other features and commands – like the hazard flashers – while futilely stabbing at the display screen.

Thankfully, it is easy to get to the system’s “Home” screen, where the icons are large, responsive, and graphically appealing. Better yet, there’s a power/volume knob, and a tuning knob, just like in the olden days. And the redesigned triple-zone automatic climate control layout, which includes rotary temperature knobs and a fan speed control knob, is all kinds of better compared to the previous Enclave.

Generally, however, I found many of this Buick’s controls either too small, or marked with icons I couldn’t easily see or easily understand, or hyper-sensitive, or cruelly insensitive. It is, at times, a distracting vehicle to drive, and could really use a Forward Collision Warning system.

For 2013, Buick adds a standard reversing camera to the Enclave, and offers Side Blind Zone Alert and Rear Cross Traffic Alert systems to help the driver avoid collisions. Beyond these upgrades, however, one of the crossover SUV’s more significant advancements is the addition of a standard front-seat center airbag.

Additionally, the 2013 Enclave is equipped with six free months of OnStar Directions and Connections service, which includes Automatic Crash Notification. If the Enclave’s airbags deploy, an operator will attempt to communicate with the SUV’s occupants, and even if nobody can respond, the operator can send emergency personnel to the scene of the accident to speed rescue. Another OnStar feature is an opt-in service called FamilyLink, which allows the Buick’s owner to monitor vehicle location via a mobile application.

As this review is published, the NHTSA has not performed crash tests on the 2013 Buick Enclave. The Insurance Institute for Highway Safety calls the 2013 Enclave a “Top Safety Pick.”

Every 2013 Buick Enclave is equipped with a direct-injected, 3.6-liter V-6 engine generating 288 horsepower and 270 lb.-ft. of torque. Power is fed to the front wheels through a 6-speed automatic transmission, one that Buick says offers improved shift feel for 2013, and all-wheel drive is optional. Buick says the Enclave can tow up to 4,500 pounds, and can be flat-towed behind an RV.

According to the EPA, my Enclave AWD should have returned 16 mpg in the city, 22 mpg on the highway, and 18 mpg in combined driving. I averaged 16 mpg over more than 300 miles of mixed driving.

In my opinion, in addition to the Enclave’s appealing exterior styling, its driving dynamics are the best thing about it. This SUV is built on a rock-solid structure, helping it to feel taut and athletic despite its size and 4,724-pound base curb weight.

The V-6 engine provides enough horsepower and torque to make the Enclave feel lively, though exercising the engine takes a significant toll on fuel economy. You can almost see the fuel needle dropping toward Empty. Buick’s transmission refinements for the 2013 Enclave result in smoother, more precise, and more decisive shifting, and aside from audible engine whine as the revs climb, the powertrain is utterly silent.

Steering is of the good old-fashioned hydraulic power assist variety, giving it a natural heft and feel that is fast disappearing from modern vehicles. Bend the sizable Enclave into a curve, and the SUV’s suspension does a commendable job of limiting body roll. The ride quality is excellent on most surfaces, the suspension components successfully isolating harshness without completely eradicating road feel. Brake pedal response and modulation is excellent, a far cry from Buicks of the past.

Still, this is a long and wide vehicle, and its driving character is surprisingly nimble…for a full-size SUV. Nothing about the Enclave’s demeanor inspires its driver to take the long and twisty road home.

In its natural environment of mall parking lots, the big Enclave becomes a bit difficult to drive and, if you’re loading children in and out of the rear doors, is a liability in ever-shrinking parking spaces. When navigating this Buick the driver must also remember to swing a bit wide to compensate for the long wheelbase, lest its pretty flanks become scratched.

The 2013 Buick Enclave is good-looking, enjoyable to drive, safe, quiet, and offers new infotainment and safety technology that helps to keep it competitive against other luxury SUVs. Plus, it provides class-leading cargo space.

Details, however, require attention. The Enclave’s interior needs to be redesigned and re-packaged to provide simpler operation, improved materials, greater quality, and better comfort. The cabin is where a vehicle’s owner spends all of his or her time, and there are too many flaws inside the Enclave to cultivate regret rather than inspire delight.

Buick supplied the vehicle for this review 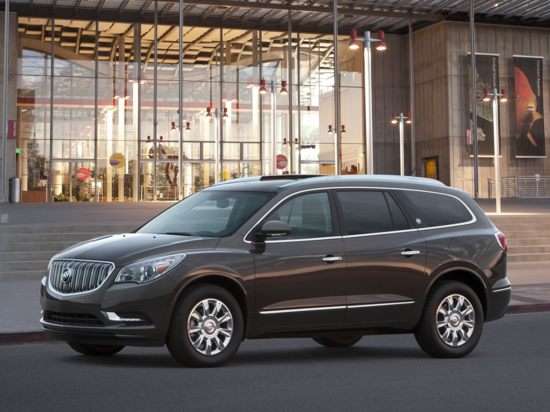