What it is
By Bengt Halvorson

Buick Enclave – 2008 Preview: The 2008 Buick Enclave is a crossover suv built off the brand new Lambda platform from GM. Targeted at the luxury end of the market against the likes of the Acura MDX and Lexus RX 350, it boasts up to eight-passenger seating, a 275-horsepower V6 engine mated to a six-speed automatic transmission, and classy exterior and interior styling. Buick says that it also is the first in what will be the “new Buick,” which the company translates as elegant design, confident ride, more luxury features, and a quiet, finely crafted and comfortable interior. The Enclave replaces the Buick Rendezvous and Rainer SUVs, and the Buick Terraza minivan in Buick’s lineup, and will be offered in CX and CXL trim levels.

The 2008 Buick Enclave is critically important to General Motors. GM’s financial problems are well known, and the best way out of it is to deliver products that surpass, or at least equal, the competition. The Enclave is the last of the Lambda-based crossovers to debut, and by far the most elegant and sophisticated, befitting its luxury status. Crossovers combine carlike ride and handing with the cargo and people hauling attributes of traditional truck-based SUVs. The segment was created ten years ago with the Lexus RX 300, and has since surpassed truck-based SUVs in popularity. GM is one of the last manufacturers to introduce a luxury crossover, and the Enclave’s mission is nothing less than competing against the excellent second-generation Acura MDX, the segment-leading Lexus RX 350 and others from Mercedes-Benz, Volvo, etc.

Powering the 2008 Buick Enclave is GM’s new 3.6-liter 275-hp V-6 with variable valve timing, a competitive engine, but not a class leader. The engine is mated to a new clutch-to-clutch 6-speed automatic transmission and either front or all-wheel drive. The new transmission promises both good acceleration and good fuel economy, the latter addressing a common complaint about SUVs, although GM did not estimate fuel economy.

The 2008 Buick Enclave takes its styling cues from the 2003 Centieme Concept and, more directly, the Buick Enclave Concept unveiled at the 2006 Detroit Auto Show. It features a tasteful blend of classic Buick styling cues—portholes on the hood and a waterfall grille—with clean, contemporary styling that wouldn’t look out of place on any first-tier luxury brand. The headlight clusters are bejeweled with a blue rings around the low beam. The portholes are integrated into the sides of the hood bulge. The fenders swell over the standard 18- or optional 19-inch wheels, and the profile emphasizes the Enclave’s long wheelbase while avoiding a too-stretched look. Designers paid special attention to the back of the Enclave, blending elements of the Lucerne and Volkswagen’s Toureg. From any angle, the Enclave looks good.

The exterior is very good, but what about the interior? A final judgment must wait until production versions are available, but 2008 Buick Enclave prototype we saw boasted excellent design and layout. The elegantly styled interior uses GM’s latest chrome-ringed switchgear on the climate control, sound system and navigation system, and it’s as good as anybody you’d care to mention. The colors were tastefully matched, and the gauges are tucked into five deep wells in the instrument panel. The cabin is awash in storage compartments, including a deep well in the center console and a dashtop bin. The second and third rows fold flat to reveal a huge cargo area. We hope that the heavily textured plastic on the doors and dash will be replaced with something with a bit less grain (but keep the soft touch), but even this early prototype showed good build quality inside.

General Motors is hoping that its attractive, all-new 2008 Buick Enclave becomes the life of the red-hot luxury crossover SUV party. Its powerful V-6 engine, all-wheel drive, long equipment list and attractive interior and exterior styling certainly give it fashion. Expect it to hit showrooms in late Spring or early Summer, 2007.

The 2008 Buick Enclave has to be good. No, scratch that, it has to be great. General Motors has high hopes for the new model, and buyers used to Lexus and Acura levels of quality aren’t willing to compromise. On paper, the Enclave has the goods, and in person, the styling inside and out appears up to the task. All we can say is that we’re as eager as anybody to find out if GM’s late arrival is someone we want to party with. 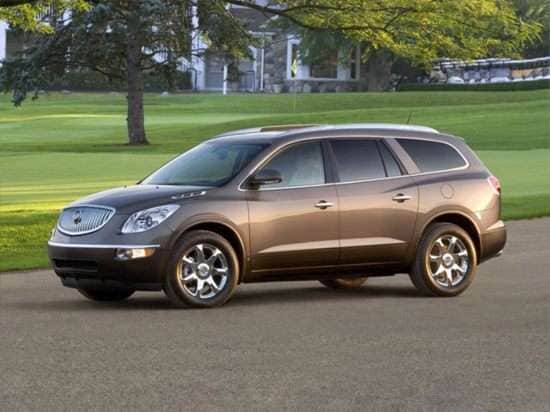