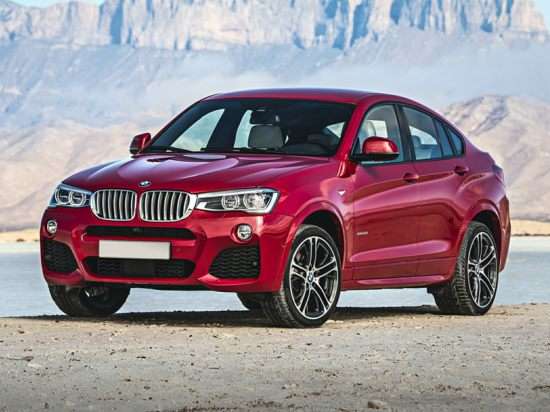 Sitting between the X3 and the X5 in BMW’s Sports Activity Vehicle lineup, the new 2015 BMW X4 is essentially a fastback version of the X3 with less interior room and a higher price tag.

BMW’s xDrive all-wheel-drive system is also standard, and every X4 is equipped with an 8-speed automatic transmission with a Sport mode and paddle shifters. BMW also provides free scheduled service for the first 4 years or 50,000 miles.

In combined driving, the BMW X4 xDrive28i is expected to get 23 mpg. Choose the more powerful and satisfying X4 xDrive35i model and the figure drops to 22 mpg.

As this summary is written, neither the NHTSA nor the Insurance Institute for Highway Safety (IIHS) has performed crash tests on the 2015 BMW X4.

Automatic high-beam headlights, a reversing camera, a surround view camera system, and front parking assist sensors are available for the X4, as well as a parking assistant that can steer the SUV into a parallel parking space while the driver operates the transmission and the pedals. The optional adaptive cruise control system features stop-and-go capability, and is packaged with forward collision warning and lane departure warning systems. The X4 is also available with an active blind spot warning system that also detects fast-approaching traffic in adjacent lanes.