The BMW X3 is a four door five passenger Sport Activity Vehicle.  Built atop the 3 Series platform; the X3 is a compact SUV and the German luxury automaker’s entry level all wheel drive SUV which is offered in two variants.  The first being the naturally aspirated xDrive28i as well as the turbocharged xDrive35i.

The base X3 xDrive28i starts at $36,850 and is powered by BMW’s proven 3.0 Liter inline six cylinder gas burning engine that produces 240 HP and 221 lb-ft of torque, mated to an fuel saving 8 speed steptronic automatic gearbox that when combined are good for an estimated 19 MPG in the city and as much as 25 MPG on the highway.  The X3 features a large trunk complete with helpful amenities like a 12 Volt power outlet, restraining hooks to anchor larger items and a hidden under tray storage compartment for valuables.

The more powerful X3 xDrive35i is based around a turbocharged version of the 3.0 Liter TwinPower straight six cranking out an even 300 HP and 300 lb-ft, this allows the boosted X3 to reach 60 MPH from a standstill in just 5.5 seconds, 1.2 seconds faster than the xDrive28i, while returning an estimated 19 MPG in the city and 26 MPG on the highway.  Not to mention that the xDrive35i is also upgraded with a set of 18 inch alloys as opposed to the base X3’s 17s all for $42,400. 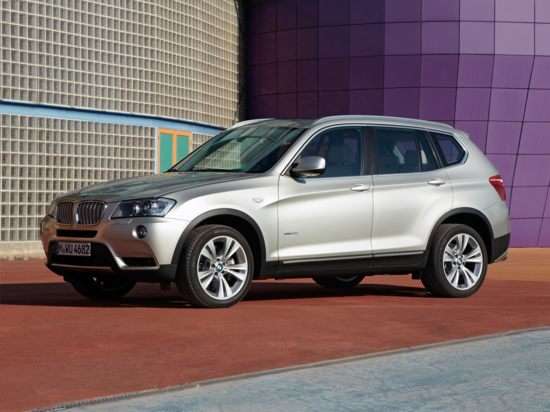