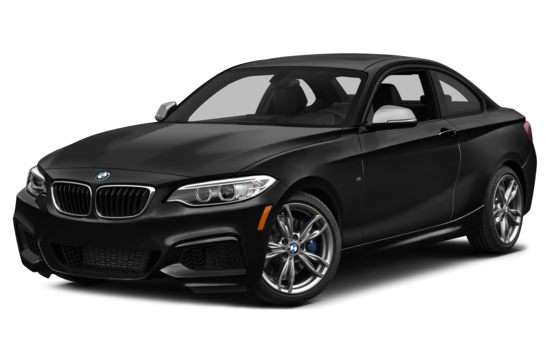 Continuing its nomenclature theme of designating its two-door models with even numbers, the new BMW 2 Series Coupe is the replacement for the BMW 1 Series Coupe models, which ran from 2008 to 2013. While the base model 2 Series Coupe is the BMW 228i, the M235i is the high performance version of the new 2 Series product line. Powered by a 320-horsepower 3.0-liter turbocharged inline six-cylinder engine, the M235i places 330 ft-lbs of torque at its driver’s disposal.  An eight-speed automatic transmission is standard equipment, a six-speed manual with dry-sump lubrication and a short-throw shifter is offered as an option for the rear drive sport coupe at no additional cost.

The suspension system features a set of staggered-sized 18-inch tires and wheels, with a 19-inch option. BMW’s M Sport braking system and variable sport steering are fitted as well. BMW is also offering the M performance limited-slip differential as an optional accessory for the M235i. Acceleration from zero to 60 is quoted at five seconds with the manual transmission. With the automatic’s launch control system engaged, the M235i will do it in 4.8 seconds. Top speed is limited to 155 miles per hour.

Longer, wider and in possession of a wider track than the 1M Coupe it replaces, the BMW M235i offers more interior volume, more cargo capacity (13.8 cubic feet) and better handling. The look of the car, while obviously the “small” BMW coupe, is nevertheless more substantial than that of the 1 Series M Coupe as well. In fact, the resemblance to the new BMW 4 Series is quite remarkable. The nose is stretched, the rear wheel arches are quite pronounced and the greenhouse treatment is considerably ‘faster”. All in all, the new car looks considerably sleeker than the model it supplants.

The interior treatment, while classic BMW in its overall layout and presentation, is updated as well. Further, the 2 Series car is also more substantially equipped than the 1 Series. Standard equipment for the M235i includes automatic headlights, foglights, rain-sensing windshield wipers, cruise control, and a 60/40-split-folding rear seat to improve cargo capacity, along with a tilt-and-telescoping steering column, and BMW's iDrive monitored by a 6.5-inch video display. Bluetooth telephony and audio streaming are included, along with a ten-speaker audio system. The M235i also gets adaptive xenon headlights; a set of power adjustable front seats, an adaptive suspension system, and a free-flowing twin tailpipe sport exhaust system. For 2014, BMW M235i pricing starts at $43,100.