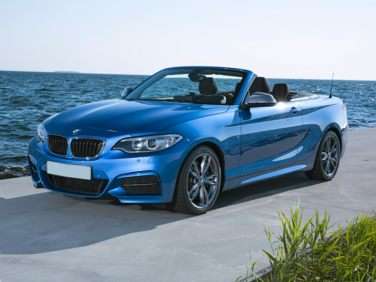 BMW is a luxury auto manufacturer that is based in Munich, Bavaria, Germany, and was founded in 1916. BMW’s luxury and performance passenger cars are sold all over the world, and the company produces a diverse lineup of vehicle types. The BMW M235 is a vehicle in the brand’s 2-Series lineup of compact luxury coupes. The company introduced the 2-Series in late 2013. The 2-Series, including the M235, is a front-engine vehicle that with a rear-wheel-drive configuration. As of the introduction of the 2-Series range, the international model lineup included the 218d, 220d, and 225d diesel models, as well as the 220i and M235i gasoline-powered models. The model lineup was introduced at the North American International Auto Show in Detroit in January of 2014.

The BMW M235i, and the rest of the 2-Series, closely resembles the BMW 1-Series vehicles from which it is descended, although the profiles have been refined somewhat to differentiate the new vehicles from the older lineup. The 2-Series features a revised front end, with a more aggressive grille, flanked by sleeker sheet metal and headlights. The rear profile and taillights also got new lines. The 2-Series coupes feature a 2+2 interior layout, which focuses the driving experience on the driver and front seat passenger, although a rather tight space is provided for two occasional backseat passengers.

Though the vehicles in the 2-Series lineup are nearly visually identical, they are available in a range of configurations, denoted by the numbers in the model name. Since the M235i sits at the top of the 2-Series range, BMW has equipped the vehicle with a 3.0-liter inline-six twin-scroll turbo gasoline engine that is capable of producing 322 horsepower. This engine comes paired with one of two available transmissions: a six-speed manual or an eight-speed automatic with Steptronic technology. The electronically limited top speed is 155 miles per hour. The BMW M235i is equipped with a launch control feature that helps the car achieve the 0-60 sprint in 4.8 seconds with the automatic transmission; the manual transmission takes 5 seconds to meet the same goal. Environmental Protection Agency fuel economy estimates for the BMW M235i vary based on transmission. The auto transmission should yield 22 miles per gallon city, 32 highway, and 25 combined; the manual is estimated to achieve 19 miles per gallon city, 28 highway, and 22 combined. One of the justifications for upgrading to the M model of the 2-Series is the suspension, tuned for curves as well as the highway. The M Adaptive suspension and M brakes complement the car’s sport-tuned steering for a driver-focused experience. The M235i also features 18-inch wheels, although an upgrade to forged alloy 19-inchers is available as an option. The BMW M235i features a 6.5-inch center infotainment screen; opting for the navigation system means an 8.8-inch screen will be there, instead. Leatherette upholstery can be traded in for leather, and the matte silver interior trim can be upgraded to wood or polished aluminum. The BMW M235i became available in early 2014, and the 2-Series model range is projected to grow, possibly with the addition of a convertible.