The 2014 BMW i3 is an unlikely product from a company that was late to embrace hybrid technology and which for years was insistent – and in ways, still is – that hydrogen fuel cells were the alternative fuel of the future.  This is in part what makes the BMW i3 such an amazing automobile, as it demonstrates the engineering expertise of a company that only recently got on-board the electrification bandwagon.  Of course, there were a number of pilot projects along the way – the MINIe and the BMW ActiveE most notably – but it’s all lead up to this moment: the production of a real-world, every-day electric car that’s not only reasonably priced, but also relatively fun to drive.

In some ways, the German brand owns the segment right from the start, as no other luxury automaker is producing an entry-level, pure-electric vehicle.  The i3 certainly sets the bar high for any that would follow, and it serves as an enticing introduction to what promises to be a successful ‘i strategy’ in electric mobility from BMW.

It’s clear that BMW was looking towards the future not just when designing the 2014 BMW i3’s electric drivetrain, but also when styling its sheet metal.  Or should I say ‘carbon fiber,’ because much of the car is either fully formed out of the advanced material or has it woven into its individually-replaceable panels.  The wheels-at-each-corner attitude of the i3, combined with its ultra-short front and rear overhangs suggests a MINI influence during the hatchback’s conception, but the kidney grilles, hawk-like headlights, and LED tail lights are pure BMW.  It’s a car that attracts attention, and by attention I mean outright stares: such was my lot during the two hours I spent behind the wheel of the i3.  That being said, it’s not a jarring collection of cutting edge visual concepts, but rather a pleasing whole that doesn’t look out of place when parked beside more pedestrian automobilia – merely different.

Bigger Than It Looks

Bigger Than It Looks

BMW has done an excellent job of opening up the 2014 BMW i3's interior so that it feels much more spacious than its subcompact exterior might suggest.  This is especially apparent on the vehicle's dash, where a low and scalloped theme provides substantial real estate between the wood-and-plant-sourced materials that make up the majority of the vehicle's interior and the i3's windshield.  There's also the second set of rear-hinged doors and lack of B-pillar to make it easier to crawl into the i3's rear seat, effectively removing the entire side of the hatchback to reveal a reasonable, if not generous, pair of positions behind first row.  BMW has gone all-out when it comes to sourcing natural processes, fabrics, and surfaces for the i3, and this includes naturally-tanned leather that feels quite soft to the touch as well as door and dash panels that look almost unfinished in black and grey.

The gauge cluster for the 2014 BMW i3 consists of a single LCD panel jutting up in front of the driver, complemented by a slightly larger flat screen positioned at the middle of the car's dash.  There's also a row of buttons recessed into the dash lip that control radio station presets and stereo volume, and then underneath that a second array of buttons and a single dial to manage the vehicle's climate system.  You'll find an iDrive controller on the center console, along with a button for choosing between Comfort and Eco Pro driving modes.  It's minimalist, but it looks good and functions just fine.  It's a bit weird, however, that the gauge screen features such an abrupt cutoff that frames displayed data - it's not an edge-to-edge panel.

Another unusual affectation found inside the BMW i3 is its shifter, which is mounted to the top right of the steering column almost where one would expect to insert a key (if the car had one).  It's a chunky, oddly-shaped handle that you twist forward for Drive and backward for Reverse, with a button for Park and another one for starting and stopping the hatchback.  It's perhaps the one out-of-place element inside what is otherwise a well-executed cabin, and it's not easy to reach around the steering wheel every time you want to put the car in gear.

Plenty Of Power To Play With

Plenty Of Power To Play With

There are two most excellent characteristics of the 2014 BMW i3's electric drivetrain that set it apart from other small EVs.  The first is that its rear-wheel drive, making it perhaps the only non-puller hatchback in the world of subcompact vehicles, gas or electric.  Why is this important?  BMW has placed the i3's electric motor at the rear and lined its floor with modular battery packs (which can be replaced individually, if needed), giving it a very pleasing center of gravity and a willingness to turn in that most other small EVs simply can't match.  It's not a sports car by any stretch of the imagination - steering is a wee bit heavy - but it's more engaging to drive than most of its electric brethren.

The second factor that helps the 2014 BMW i3 to hold a pilot's interest is its hearty power output.  The car's electric motor produces 170 horses and 184 lb-ft of torque - numbers that are a close match for the classic E30 edition of the BMW 325i.  Able to sprint to 60-mph in less than seven seconds when left in Comfort mode, the i3's instant-on energy delivery erases the memory of more sluggish EV efforts like the Nissan LEAF.

Having that much power on hand doesn't have much of a negative impact on the i3's battery range, either.  Fully-charged, the 2014 BMW i3 can go roughly 62 miles in standard driving.  Switch it to Eco Pro+ mode and you'll squeeze out as many as 100 miles from a single top-up, an feat achieved by dialing back acceleration as well as climate settings.  The car's navigation system will overlay just how far the car can travel based on what mode it's in, current traffic conditions, and the topographical features of the area where you are driving, which goes a long way towards helping you figure out if you can make it home without having to plug in.

The i3 also makes an aggressive effort to recharge its battery while on the road via its regenerative braking system.  In fact, as soon as you lift off of the hatchback's accelerator, the brakes engage, which means you don't actually need to touch the brake pedal to stop when rolling slowly towards a red light.  It also means you can't really coast in the car - it won't even creep forward unless you physically touch the go-pedal - so there's a bit of a learning curve when first driving the BMW.  Its not unpleasant, it's just different.

For those who still aren't convinced they can wean themselves off of their gasoline-soaked security blanket, you can order a range-extending two-cylinder generator, or REX, with the BMW i3.  The REX gives the car a total of 185 miles of range, but it should be noted that it also adds 250 lbs of weight and cuts about seven miles from battery-only operation as a result.

The 2014 BMW i3 lives up to the hype, and that's by design.  BMW restrained itself from making any hyperbolic claims about the i3 changing the face of modern motoring, preferring instead to highlight its solid range, its relatively affordable pricing (starting at $41,350 before federal tax rebates), and its fun-to-drive nature.  As a whole, the BMW i strategy does take a big picture swipe at redefining daily driving, but the i3 is a piece of that, not the end game.

As a second or third car, the BMW i3 makes a lot of sense for anyone looking for an urban runabout.  As a primary vehicle, it's also an intriguing option, given that its battery life can more than handle the average commute of most Americans, and that BMW offers a loaner program that gives i3 owners access to a fleet of traditional gas-powered automobiles when a longer trip is in the cards.  Perhaps the most exciting thing about the i3 is the anticipation of where BMW can go next with its electric car program, given that this little battery-powered subcompact has laid down such a solid, and enticing foundation. 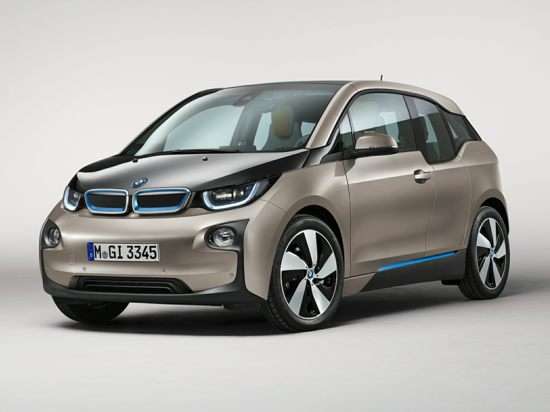