Until the day when BMW offers an M version of its flagship 7 Series sedan, buyers in the market for a full-size performance sedan from this automaker will only have the Alpina B7 from which to choose. The good news for these shoppers is that the 2013 BMW ALPINA B7 is getting a decent upgrade for 2013 with a tweaked styling and a decent bump in power. The new 2013 BMW Alpina B7 will make its official debut this August at the 2012 Pebble Beach Concours D'Elegance.

The most important news for this mid-life update on the Alpina B7 is that the engine will see its output increase to 540 horsepower and 538 lb-ft of torque (up from 500 hp and 516 lb-ft) which now helps give the car a top speed of 194 miles per hour and the ability to accelerate from zero to 60 mph in about 4.4 seconds - not bad for a car pushing almost three tons of curb weight! Another big change for the 2013 BMW Alpina B7 is the switch to an eight-speed automatic transmission replacing the previous six-speed gearbox. Automatic stop-start will also be added to the car for 2013 in an attempt to reduce exhaust emissions and improve fuel economy (however minimally it may be).

Get ALPINA B7 Pricing

In terms of its styling, the 2013 BMW Alpina B7 will get a slightly new look thanks to a reshaped front fascia which features improved aerodynamics, new Xenon adaptive headlights and LED fog lights. BMW also says that the taillights are also new on the 2013 7 Series and Alpina B7, but any changes to the rear of the cars appear minimal. Our favorite part, the quadruple exhaust outlets, are still present at the angle most performance sedan drivers will be seeing of the Alpina B7 (except maybe for the lucky drivers of the Mercedes-Benz S65 AMG). New options on the Alpina B7 include LED headlights, Bang & Olufsen surround sound audio system and improved interior options that mimic the 2013 BMW 7 Series. New colors are available for the 2013 Alpina B7, but it definitely stands out the most in its exclusive Alpina Blue Metallic paint. The car's aggressive overall styling is finished off with unique 21-inch, 20-spoke wheels.

When the new Alpina B7 goes on sale this fall, it will have a starting price of $128,495 for the standard wheelbase, rear-wheel drive model. The long-wheelbase version of the 2013 Alpina B7 will start at $132,395, and both models are available with BMW's xDrive all-wheel drive system for an additional $3,000.

Get ALPINA B7 Pricing 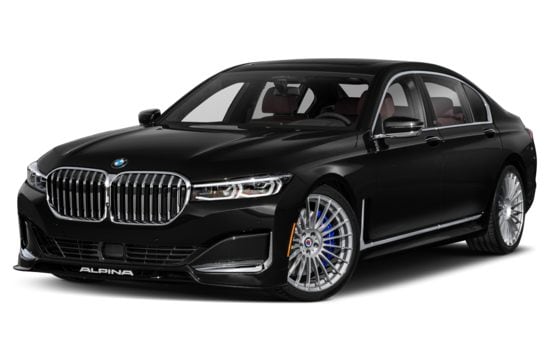