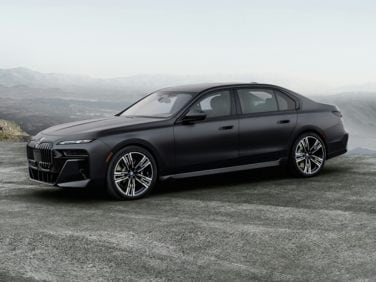 The BMW 760 is part of the long-running 7-Series full size luxury sedan lineup from the German auto manufacturer. The 7-Series was introduced in 1977 and is considered BMW’s flagship vehicle. BMW 7-Series cars are produced at BMW assembly facilities in Germany, Mexico, and India. The 760 is one of the largest sedans offered by BMW, and historically features some of the automaker’s most powerful and technologically advanced engines and features. It is a front-engine, rear-wheel-drive car, except for models equipped with the optional xDrive all-wheel-drive system. There is also a High Security version of the 760Li available, featuring undercarriage armor and safety-glazed, laminated multi-later glass, certified with BRV 2009 and VR7 ballistics protection.

The generation of the 7-Series produced from 2001 to 2008 (internally known as the E65)  was the first time the BMW 760 was available. The lineup included a BMW 760i and 760Li, both equipped with a 6-liter V12 gasoline engine. This was considered to be one of BMW’s top of the line engines and had very limited availability. This drivetrain produced  431 brake horsepower for the 760i and the 760Li. From this generation, the BMW 760i was available from 2002 to 2006; the 760Li was available from 2002 until 2008. The 760 was unveiled, along with the rest of the 7-Series, at the 2001 Frankfurt Motor Show, and released for sale in Europe in November of that year. The E65 7-Series hit the United States and other global markets in the spring of 2002. The 760’s exterior was updated mid-generation by a design penned by BMW’s chief designer, Chris Bangle, who favored an aggressive rear intersection of the fenders and trunk lid, in stark contrast to the brand’s traditional conservative styling. This design went on sale in March of 2005.

The next generation of the 7-Series to be introduced is the fifth generation, though it marked only the second generation of the BMW 760 model. This generation, known as the F01 and F02, was unveiled in Moscow in July of 2008 and again later that year at the Los Angeles Auto Show. Most models went on sale in November of 2008, although the 760i and 760Li were added to the lineup in 2009 as 2010 model year cars. This 7-Series generation is still in production. It is the first generation of 7-Series to add BMW’s xDrive all-wheel-drive system as an option, as well as the first generation to equip every model in the lineup with a turbocharged engine and an eight-speed automatic transmission. The 760i and 760Li are powered by a twin-turbocharged V12 engine that produces 537 horsepower, paired to the aforementioned eight-speed automatic with Steptronic. The BMW 760i and 760Li have a top speed of 155 miles per hour. For the 2012 model year (2013 in the United States), the 760i and 760Li got new full LED headlights, a new grille and front apron design, a new multifunctional instrument panel and control panel, a rear seat entertainment system, coasting mode, an upgraded chassis with automatic air suspension, an updated navigation system, a night vision system, and park assist.