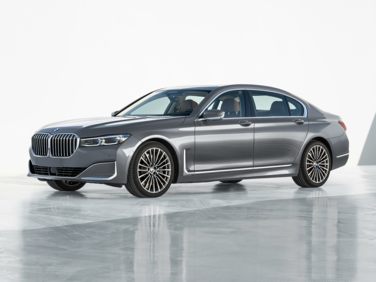 The BMW 7 Series is a four-door, five-passenger full-size sedan. The BMW 7 Series has long been the German auto manufacturer’s flagship sedan. Historically, the 7 has served as the test bed and showcase for the technological innovations and styling decisions with which BMW hoped to impress the automotive world. It was the first car in BMW’s lineup to be outfitted with the iDrive interactive controller, the first vehicle to be converted to run on hydrogen power, and the first to receive Chris Bangle’s corporate styling makeover in 2002.

The level of comfort and coddling only gets larger with the next trim level, the 750Li. Riding on a longer wheelbase, the 750Li provides more interior room for rear passengers. Programmable cruise control, voice-controlled navigation and of course iDrive round out the standard features list. In terms of options, the spectacular night vision feature allows drivers to see in the dark with infra-red cameras, making it much easier to avoid accidents on dark country roads.

For those who require their full-size sedan to have sports car power, the range-topping 760Li fits the bill. A 438 horsepower V-12 engine takes the place of the V-8 under the hood, and the 5,000 lb car is capable of accelerating to 60 miles per hour in a neck-snapping 5.4 seconds. Fuel mileage is a brutal 13 miles per gallon in city driving, but that is the price to pay for a sedan that feels more like a private jet than a road-going car.

While the 7 Series may have caused a sensation when it first appeared in 2002, most drivers are now accustomed to its unique proportions and inward curves. Despite the vehicle’s enormous size, equally large brakes and a finely tuned suspension system are up to the task of taming both the weight of sedan and the horsepower unleashed by the driver’s right foot. As is to be expected, the ride comfort is unparalleled, making this a car that is as much fun to be driven in as it is to drive.

While it may be pricey, there are few automobiles on the road which can keep up with the 7 Series in terms of innovation, luxury, or even performance. This is the ultimate vehicle for anyone who desires SUV-like space without the social stigma or off-road appearance.

The 2009 BMW 7-Series is all-new for this model year. The exterior styling of the vehicle has been toned down from the previous edition of the vehicle, resulting in a look that is less polarizing. The 7-Series continues to serve as the high technology flagship for the BMW brand, as the vehicle offers night vision, active blind spot detection, active cruise control, rear and side view parking cameras and a heads-up display. Multimedia screens mounted in the front headrests can entertain rear passengers, and a new edition of BMW’s iDrive vehicle systems control software interface has been installed in the sedan. The long-wheelbase edition of the 7-Series sees rear seats which can be adjusted, heated and cooled, and which also offer a massage feature.

At the heart of both the 2009 BMW 750i and the extended chassis 750Li is a turbocharged, 4.4 liter V8 engine that produces 400 horsepower and 450 lb-ft of torque. This superb engine is mated to a 6-speed automatic transmission and can accelerate the car from 0 to 60 miles per hour in just 5.1 seconds, an astonishing number given the heavy weight of the vehicle. Fuel consumption for the 2009 BMW 7-Series has yet to be released by BMW.

The 2008 BMW 7 Series is still riding on the same platform that it was introduced on 6 years ago. The vehicle is divided into three different trims. The first is the 750i, which is powered by BMW’s 4.8 liter, 360 horsepower V-8. While it may be the entry-level 7 Series, that doesn’t mean that drivers and passengers will be suffering from a lack of luxury. To begin with, the driver’s seat has 14-way power adjustments, while the front passenger has to make due with only 12. If that is not enough, 20-way adjustment is optional. Doors unlock with a touch of the handle as long as the vehicle’s key device is in your pocket, and the engine can be started by simply pressing the Start / Stop button on the dash.