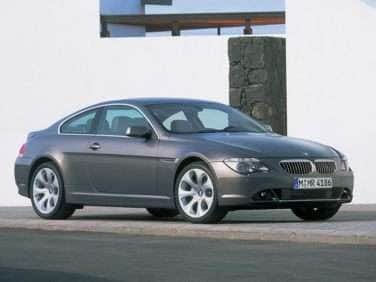 The BMW 645 is a model in the 6-Series lineup of luxury touring vehicles, which have been available as coupes, convertibles, and, as of its third generation, a fastback-style four-door coupe. The German luxury and performance auto manufacturer introduced the 6-Series in 1976, but the 645Ci trim level did not become available until the introduction of the car’s second generation. The BMW 645Ci was assembled at a BMW production facility in Dingolfing, Germany, alongside the other vehicles in the 6-Series lineup. It is a front-engine, rear-wheel-drive vehicle.

The second generation of the BMW 6-Series featured the aforementioned BMW 645Ci, a two-plus-two coupe, a configuration in which the two front seat occupants enjoy most of the vehicle’s interior space, although there are two cursory spots in the back seat for occasional passengers. It premiered at the Frankfurt Motor Show in 2003, was released in March of 2004, and was joined shortly after by a convertible version. Handling and drivability features included active anti-roll bars, variable ratio steering, and aluminum suspension components complemented by steel coils, although buyers could opt for hydraulic anti-roll bars to assist in cornering. The BMW 654Ci of this generation was powered by a 4.4-liter 32-valve V8 engine that yielded 325 horsepower. Available transmissions were a six-speed manual, a six-speed automatic, or BMW’s sequential manual gearbox that operates with paddle shifters. The BMW 645Ci achieved a 0-60 acceleration time of 5.5 seconds. The Environmental Protection Agency rated the BMW 645Ci at 17 miles per gallon city and 24 miles per gallon highway. Other features included BMW’s iDrive computer-based driver information system with a color display screen and a knob control, and automatic adjusting xenon headlights.

The body of the 645Ci was based on a concept vehicle known as the Z9 GT, first shown at the Frankfurt Auto Show in 1999. The styling linked the 645Ci to BMW’s other large vehicles, with touches such as the kidney grilles, sweeping flanks, and squared-off trunk lid. Although the car’s designer, BMW chief designer Chris Bangle, faced criticism for the car’s thick B-pillars and the polarizing rear end profile, the second generation of 6-Series is considered a defining moment for the brand’s style evolution. The second generation of the 6-Series, including the 645Ci, was produced until 2010.