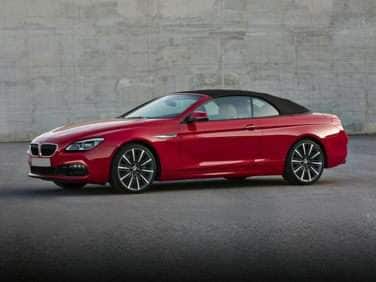 The BMW 640 is a model in the 6-Series lineup of luxury touring vehicles. Throughout the BMW 6-Series’ lifetime, the cars in the series have been available in several body styles, including coupes, convertibles, and, as of its third generation, a fastback-style four-door coupe. The German luxury and performance auto manufacturer introduced the 6-Series in 1976, and the lineup and configurations of the series have evolved in the past several decades. Throughout the BMW 640i’s life, it has been assembled at a BMW production facility in Dingolfing, Germany, alongside the other vehicles in the 6-Series lineup. As of the 2014 model year, the BMW 640i is still available as a coupe, Gran Coupe, or cloth top convertible, in both rear-wheel-drive and xDrive all-wheel-drive configurations. The BMW 6-Series, including the 640i, is in its third generation, which was unveiled in 2011 at the Shanghai Auto Show and the New York Auto Show. The 6-Series Gran Coupe was revealed a little later, at the 2012 Geneva Motor Show.

Much of the BMW 6-Series’ engineering is shared across the 5-Series and 7-Series vehicles, although the lineup’s size is designed to fit midway between the sportier 5 and the more luxurious 7. Though the four-passenger, two-door 640i is equipped with the least powerful engine in the 6-Series lineup, it is still a well equipped vehicle considering the cost savings, and some of the features found on the higher end 6-Series cars can still be added to the 640i as upgrades. The BMW 640i features a turbocharged 3-liter inline-6 engine with direct fuel injection, which is paired to an eight-speed automatic transmission with a manual shifting mode. The drivetrain’s output is 315 horsepower, and the BMW 640 can achieve a top speed of 130 miles per hour, although buyers can opt for an upgrade to 155 miles per hour, which is not really a tune-up to increase the engine’s power, but rather a modification of the electronic speed governor that restricts the car’s maximum performance. The BMW 640i can accelerate from 0-60 in 4.8 seconds. The Environmental Protection Agency has rated the BMW 640i’s coupe’s fuel economy at 21 miles per gallon city, 31 miles per gallon highway. These numbers may vary somewhat based on configuration. Opting for the more luxurious Gran Coupe, less aerodynamic convertible, or more functional xDrive all-wheel-drive option can cause fuel efficiency to suffer slightly.

The cabin of the 640i is similar between the coupe and the convertible configurations, although the convertible features special upholstery that reflects sunlight, keeping the seats cool even with the top town. The cockpit design is focused on a 10.2-inch center display for the navigation system and the driver controls. Standard equipment includes 18-inch wheels, an adaptive sport-tuned suspension system, parking sensors, keyless ignition and entry, leather upholstery, heated 10-way power front seats with memory functions on the driver’s seat, automatic adaptive xenon headlights, LED fog lamps, dual-zone automatic climate control, adaptive cruise control, Bluetooth wireless integration, and a nine-speaker audio system with HD radio and satellite radio. Many of the add-on options come as part of a packaged bundle, and there are several different packages to choose from. Among them are a driver assistance package which adds safety cameras, blind spot detection, and lane departure warning, while an M Sport package adds larger wheels and sport-inspired accessories.