There's an old German proverb that goes something like this: "And Alexander wept, for there were no more niches left to conquer." The 2016 BMW 6 Series Gran Coupe represents the source of the great general's pain, as its insertion into the uniquely Teutonic sphere of four-door "coupes" gives BMW traction with yet another sliver of a customer base that, when all are added together, helps keep it near the head of the global luxury pack.

Regardless of your position on BMW's decision to slice the premium market into dozens of ultra-thin wedges, it's hard to deny that the 6 Series Gran Coupe makes an impression. Its long, cylindrical proportions call to mind a stealthy submarine, and indeed its periscope is locked firmly on rivals from Audi and Mercedes-Benz in an effort to snag well-heeled style-conscious buyers. I spent a week behind the wheel of the top-tier 2016 BMW 650i xDrive Gran Coupe to see how well the uniquely-tailored four-door fit into my day-to-day.

When the 2016 BMW 650i xDrive Gran Coupe surfaces next to the valet station you can bet it gets noticed by everyone in the immediate vicinity, especially if it's wrapped in the matte gray paint of my tester. With a long shark nose that calls to mind the original 6 Series of the 1980s, now more than ever with its aggressively slotted kidney grille arrangement, the sheer bulk of the Gran Coupe exudes power. In profile, the sloped roof adds to the feeling of overall length—this is, after all, a car that boasts 4.5 inches more wheelbase than the 5 Series sedan whose platform it shares (checking in a four inches longer overall). Still, for all its imposing bulk the 6 Series Gran Coupe is remarkably unadorned, with only the de rigueur chrome vent thinly carved into the front fender offering a break from its smooth lines. Even the car's dual exhaust are tucked under the broad swells of a flat black bumper insert, staying true to the understated nature of the BMW's design language.

Despite being so much bigger than its 5 Series sibling, the 2016 BMW 650i xDrive Gran Coupe isn't able to put its proportions to much use inside the cabin. Sure, the Gran Coupe is appreciably larger in the rear seat when compared to the two-door 6 Series, but matched up against the 550i xDrive you'll quickly notice a definite lack of head space for anyone riding behind the driver and front passenger. There are a few clever tricks that have been employed to mask the intrusion of the coupe-like roofline, including using some of the extra legroom available to slide the back seat lower and forward—effectively reclining occupants—but despite these efforts my 5-foot, 7-inch frame still rubbed the top of my head against the ceiling when sitting normally.

A more disappointing aspect of the 6 Series Gran Coupe's compromised practicality has to do with its cargo area, which has shrunk to a modest 13 cubic foot trunk. While hardly the accommodations one would expect from such a large automobile, all would have been forgiven had the model adopted the same hatchback liftgate as the BMW 4 Series Gran Coupe, which further maximizes storage by way of a fold-down rear seat. The decision to stick with a "traditional" trunk lid on a non-traditional body style puts me in the unusual position of lauding the 4 Series Gran Coupe for the style and utility upgrade it presents over its 3 Series progenitor, yet not being able to do the same for the larger but somehow less useful 6 Series Gran Coupe.

Interior Trappings Remain On The Plain Side

Interior Trappings Remain On The Plain Side

A simply stated exterior works well for the 2016 BMW 650i xDrive Gran Coupe, but I'm less convinced that it was the way to go inside the car. Most modern BMWs have trended towards plain in their interior presentation, and the Gran Coupe is no exception. Black plastic buttons and dials sit under the car's LCD infotainment display on the center stack, a rotary iDrive controller is perched on the console, and the standard BMW gauge layout sits in front of the driver. All of this is surrounded by straightforward leather stitched into the dash—in the case of my car a pleasing two-tone saddle brown and black. Yes, the console and stack have been tilted towards the driver, and the rising crest that holds the iDrive controller links up with the dash in a manner that serves to further enhance the deep-seated feel of the 6 Series Gran Coupe, but there's nothing inspired about the vehicle's interior deco.

As indicated by its name, the 2016 BMW 650i xDrive Gran Coupe is aimed squarely at those seeking a "grand touring" car. That term is used to describe typically larger automobiles aimed at offering lively performance that stops just on this side of what a dedicated sports model can provide.

The sheer bulk of the 6 Series Gran Coupe—as with its two-door equivalent—is a limiting factor when it comes to handling, as the vehicle's weight informs every aspect of its dynamic experience. Personally I didn't care, for nestled amongst the BMW's many drive modes (accessible via a button on the center console) I found "Comfort+," the selection of which dialed back the car's power steering to its laziest and softened its adaptive suspension system until I was no more aware of Montreal's pockmarked roads than were the pigeons silently judging me from the sky.

In fact, Comfort+ (a step beyond mere Comfort mode, which sat alongside Sport and Sport+) transformed the 650i xDrive Gran Coupe into the big, floaty car that the company could never advertise but which amounted to the most pleasurable iteration of the platform from a driver's perspective. The stiff shocks and frenetic shift patterns of Sport+ simply didn't make me want to hustle the car quickly through any corners—in fact, nothing short of a gastric bypass probably could have made that appealing—but as a long-distance cruiser or when picking through bumper-to-bumper traffic the Gran Coupe was a plush and appealing companion.

Big-boned though it might be, the 2016 BMW 650i xDrive Gran Coupe is still a formidable opponent when lined up for a straight-line showdown. Under the hood of my tester sat a turbocharged 4.4-liter V-8 engine capable of generating 445 horsepower and 480 lb-ft of torque, mated to an eight-speed automatic transmission (the only gearbox available with any version of the Gran Coupe) and an optional all-wheel drive system.

The V-8 represents a significantly upgrade over the entry-level version of the 6 Series—the 640i, with its turbocharged 3.0-liter inline six-cylinder mill making 315 horses and 300 lb-ft of twist—and you feel it when you hammer the gas pedal. Highway acceleration is rapid and seemingly endless, while off the line the vehicle features a launch control system that will see it hit 60-mph from a standing start in a just a tick under five seconds. Fuel mileage is predictably horrendous, as you're looking at 15 mpg in stop and go driving and 24 mpg on the highway with all-wheel drive installed. You'll be lucky to hit those numbers, too, but BMW knows few of its Gran Coupe buyers worry too much about their monthly fuel bill.

Options Sheet Doesn't Let You Down

Options Sheet Doesn't Let You Down

The 2016 BMW 650i xDrive Gran Coupe comes with a respectable amount of standard kit, including features like a Harman Kardon audio system, 16-way adjustable power seats up front, and nicer leather than the base model. The real fun begins, however, when you untether your wallet and let it loose among the 6 Series Gran Coupe's options packages. The Driver Assistance Plus package, for example, installs lane departure warning system, a forward collision warning system, automatic braking, and a blind spot warning system, while the Executive package provides soft-closing doors, four zones of automatic climate control, a head-up display projected through the windshield, ventilated seats, and window shades for the rear of the car. You can add a bit of zest to the Gran Coupe's simple lines by way of the M Sport package and its available 20-inch wheels and body kit, while rear-wheel drive versions of the 6 Series have access to a rear-wheel steering system as well as adaptive swaybars.

Considerably More Expensive Than The Alternatives

Considerably More Expensive Than The Alternatives

All of the above-listed options tack on a considerable overage to the 2016 BMW 650i xDrive Gran Coupe's already class-leading sticker price. Even the base 640i Gran Coupe's MSRP of $79,500 stands apart from rivals like the Audi A7 (MSRP $68,300) and the Mercedes-Benz CLS-Class (MSRP $66,900). Once you get into 650i territory, the gap widens further still, as my tester rang up at a heady $102,345. While it's clear that BMW feels it has an advantage over its German brethren, on paper—and on the street—it's hard to make an argument that the 6 Series Gran Coupe is significantly better than either of its two primary competitors, and that's before you bring the lighter, more useful, and cheaper BMW 550i xDrive sedan into the conversation.

Don't Forget The Coupe and Convertible

Don't Forget The Coupe and Convertible

If you don't really need the additional utility of a decent rear seat, then perhaps you might be more interested in snagging either the coupe or the convertible version of the 2016 BMW 650i xDrive. Mechanically, these cars are identical, but design-wise they make very different statements to the world. There are only a handful of large luxury coupes on the market, and while the two-door editions of the 6 Series aren't necessarily more athletic, they at least don't have any practical pretensions. Keep in mind, however, that if you avoid the Gran Coupe you can't take advantage of the Alpina B6 hot rod edition of the platform—the quickest 6 Series model around given the current absence of the M6 coupe from the line-up.

Cons:
•    Very heavy, which impacts handling
•    Taller riders will lament the lack of headspace out back
•    Tiny trunk for its size
•    Priced higher than other four-door coupes in its class
•    Fuel mileage is poor with the turbo V-8 engine installed 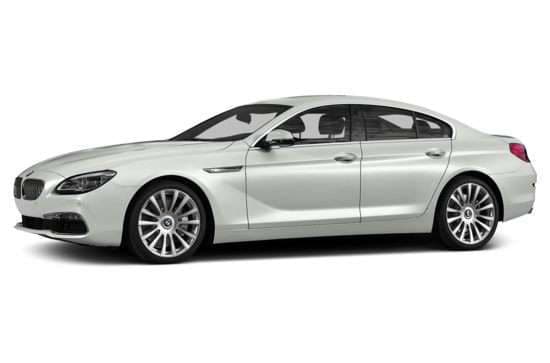