The BMW 550i Gran Turismo, is a four door five passenger fastback answer to the sport wagon from the upscale German automaker, combining the luxury and style expected of a 5 Series sedan, with the added versatility, cargo capacity and utility of a wagon.

The 550i GT is powered by BMW’s TwinPower turbocharged 4.4 Liter V8, cranking out 400 HP and 450 lb-ft of torque channeled through a gas saving 8 speed steptronic automatic gearbox, which is good to take the GT from a standstill to 60 MPH in just 5.4 seconds, and will keep on going until it reaches a top speed of 150 MPH, while returning an estimated 15 MPG on city streets and 22 MPG when cruising the autobahn.

While the front end of the $65,800 550i GT looks just like any other 5 Series, from the fenders back the mid size sedan transforms into a fastback with a four door coupe like profile thanks to the enlarged trunk space behind the rear seats and puffed out hatch that proves to be a very well-designed tailgate that features a lower door that can drop down for quick access as well as the much larger lift gate that provides unrestricted admission into the Gran Turismo’s oversized storage compartment. 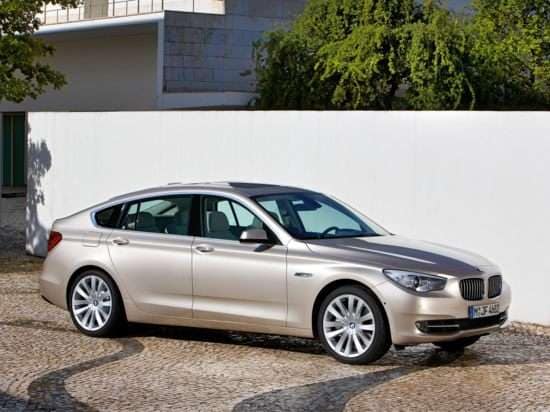