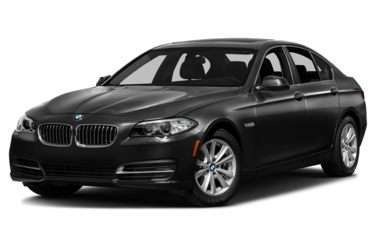 The BMW 5 Series is a four-door, five-passenger sedan and a four-door, five-passenger sport wagon. BMW’s mid-size sedan, the 5 Series, has long been one of the best rear-wheel drive luxury cars on the market. With an array of engine configurations and luxury options that allow buyers to equip the car to represent both their power needs and their desire to be coddled, the 5 Series has been in production since 1972. The most recent generation of the car was given an updated exterior in 2007, along with a few technological tweaks in order to modernize the vehicle after 3 years of production.

The 2009 BMW 5-Series is a carryover from 2008. The 2009 5-Series comes as a sedan and a wagon, and there are three separate trim levels available. The 5-Series wagon is sold exclusively in 535i xDrive trim, which provides a 300 horsepower, 3.0 liter twin-turbocharged 6-cylinder engine that also produces 300 lb-ft of torque. All-wheel drive is standard, and a 6-speed manual or automatic transmission are the gearbox choices. Fuel mileage is rated at 16 miles per gallon in the city and 23 miles per gallon on the highway with the manual transmission installed.

The 2008 5 Series bears exterior styling which is most accurately described as ‘polarizing’. Chris Bangle’s now lineup-wide design ideas have been both lauded and criticized by long-time BMW buyers and automobile journalists alike. The car bears a front clip which juts out purposely, framed by the arching eyebrows of upwardly-curved headlights, while the rear of the car is short and abrupt. The vehicle is available as both a four-door sedan and a wagon.

There are three engine options available when ordering the 5 Series. The first two, found in the 528i and 535i, are shared with the 3 Series. Both offer six-cylinder engines that produce 230 and 300 horsepower respectively, with the latter being twin-turbocharged. The 550i boasts a much more powerful V8 engine which produces 360 horsepower and 360 lb-ft of torque from a 4.8 liter unit. All engines can be ordered with a six-speed automatic which allows for shifting via steering-wheel mounted paddles, or a six-speed manual transmission. All-wheel drive is available for each version of the sedan, while the wagon, (which can only be had in 535i form), comes standard with all-wheel drive.

The 5 Series is oriented towards providing serious luxury, and it does not disappoint. Dual-zone climate control is standard, as are auto-leveling HID headlights and parking assistance. Rain-sensing windshield wipers adjust to the speed that is being driven, and a power glass moon roof lets in the sun or the stars. Some of the more unique options which can be ordered include a lane-departure warning system which is designed to help keep BMW drivers between the lines, and active cruise control, which employs a radar system to keep the 5 Series a safe distance away from the car in front of it even at speeds as low as 10 miles per hour. This feature makes the vehicle an excellent choice for anyone who finds themselves frequently caught in bumper to bumper traffic.

Each edition of the 5 Series displays the solid, fun driving characteristics with which BMW has built their reputation in the industry. The large V-8 engine is capable of accelerating 4,000 lbs of German steel to 60 miles per hour in just 5.4 seconds, which is impressive. Unfortunately, this power comes at a price – fuel economy is only 15 miles per gallon in city driving and 22 on the highway. However, given the fact that the car starts at just under $60,000, it is unlikely that owners will be upset with having to pay an extra premium at the pump to enjoy the experience of driving the 2008 BMW 5 Series.