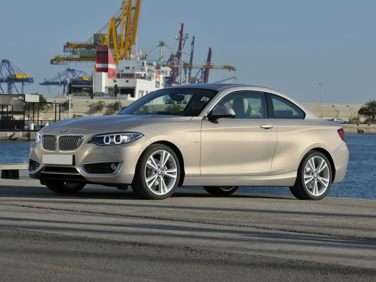 BMW is a luxury auto manufacturer that is based in Munich, Bavaria, Germany, and was founded in 1916. BMW’s luxury and performance passenger cars are sold all over the world, and the company produces a diverse lineup of vehicle types. The BMW 228i is a vehicle in the brand’s 2-Series lineup of compact luxury coupes. The company introduced the 2-Series in late 2013. The 2-Series, including the 228i, is a front-engine vehicle that is available in rear-wheel-drive configuration. The BMW 2-Series was designed to replace the 1-Series coupe and the 1-Series convertible, leaving the 1-Series exclusively as a sedan. The new 2-Series lineup competes primarily with compact luxury vehicles from the brand’s domestic competitors, the German luxury brands Audi and Mercedes-Benz. At the 2-Series launch, the international model lineup included the 218d, 220d, and 225d diesel models, as well as the 220i and M235i. The BMW 228i was, at its introduction, specifically intended for export to North America. It was introduced at the North American International Auto Show in Detroit in January of 2014.

The BMW 228i, and the rest of the 2-Series, closely resembles the BMW 1-Series vehicles from which it is descended. The 2-Series features a revised front end, with a more aggressive grille, flanked by sleeker sheet metal and headlights. The rear profile and taillights also got new lines. The cabin, though, is very similar to the 1-Series vehicles. The 2-Series coupes feature a 2+2 interior layout, which focuses the driving experience on the driver and front seat passenger, although a rather tight space is provided for two occasional backseat passengers. BMW’s iDrive infotainment system is contained in a full color 6.5-inch screen in the cockpit with eight programmable memory buttons, although opting for the available navigation system yields an upgrade to an 8.8-inch screen. The BMW 228i is equipped standard with leatherette upholstery and matte silver trim, but there are numerous interior upgrades available, such as leather seating, as well as wood or brushed aluminum trim. BMW equips the 228i with an engine stop and start button, eight-way adjustable front seats with adjustable headrests, split folding rear seats, an adjustable center arm rest, a three-spoke leather steering wheel with controls for audio functions and tilt and telescoping functionality, Bluetooth wireless integration, an audio system, dynamic cruise control, a tire pressure monitoring system, automatic climate control, rain-sensing wipers, automatic headlights, halogen foglights, a key-based memory system for climate and seat settings, and electric trunk release. The BMW 228i also features dynamic stability control and anti-lock brakes for safety.

BMW has powered the 228i with a 2-liter inline-four twin-scroll turbo powerplant that yields 242 horsepower, which was borrowed from the 328i sedan. The engine is paired to a standard eight-speed automatic transmission, although a six-speed manual gearbox is available as an option. The BMW 228i boasts a launch control feature, which helps the automatic transmission 228i achieve a 0-60 acceleration time of 5.4 seconds. Top speed is electronically limited to 130 miles per hour, but the Sport Line and M Sport trims get that raised to 155 miles per hour. The BMW 228i is priced just above the BMW X1 crossover in the brand’s model lineup.