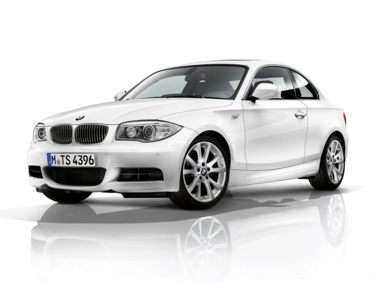 The BMW 1 Series is available as a two-door, four-passenger coupe or convertible. BMW is a company with a long history of producing small, rear-wheel drive sedans that are lightweight and fun to drive along twisty roads. In previous decades, this niche was filled by the 3 Series. However, due to the general increase in size and weight which has afflicted most of the car market, and in order to better equip the cars with luxury and safety features, the 3 Series has become more of a GT car than a sports car. Sensing that the time might be right to introduce a sporty compact in North America, BMW decided to import the 1 Series as their new entry-level vehicle.

The 2009 BMW 1 Series is a carryover from 2008. The 2009 1-Series is available as either a coupe or a sedan, and there are two different trim levels available for both. The 128i makes use of a 3.0 liter, inline 6-cylinder engine that produces 230 horsepower and 200 lb-ft of torque. A 6-speed manual transmission is provided as standard equipment, while a 6-speed automatic can be ordered as an option. Fuel mileage in city driving is rated at 18 miles per gallon, with 28 miles per gallon showing on the highway. The 135i ups performance by providing a twin-turbocharged version of the same 6-cylinder engine, tuned to generate a whopping 300 horsepower and 300 lb-ft of torque. Transmission choices are identical, and the 135i’s fuel economy numbers come in at 17 miles per gallon around town and 25 miles per gallon in city driving.

The 2008 BMW 1 Series bears a more toned down version of the ‘flame surface’ styling which was first introduced on the BMW Z4 before being ported across the lineup to both the 3 and 5 Series. The use of swooping, concave indentations and lines across the body work is much less controversial now than it was when it was initially released, but it still sets the 1 Series apart from other cars on the road. The front end of the car clearly displays shared DNA with the 3 Series but overall, the vehicle creates its own personality and does not really resemble a truncated version of the larger sedan.

The 1 Series is available as both a coupe and a convertible, and there are two different trim levels available. The 128i is powered by a 227 horsepower 3.0 liter inline 6-cylinder engine which also produces 200 lb-ft of torque. This is enough to propel the small coupe to 60 miles per hour in 6.1 seconds when equipped with the 6-speed manual transmission. The six-speed automatic transmission and convertible are slightly slower.

Those with a greater need for speed can opt for the top of the line 135i, which is outfitted with BMW’s new twin-turbocharged 3.0 liter inline six-cylinder. This impressive piece of engineering produces 300 horsepower with very little of the turbo lag which sometimes dogs these types of vehicles. Sharing the engine and six-speed transmission with the BMW 335i, the 135i can reach 60 miles per hour from a standing start in just 4.7 seconds.

Of course, being a BMW the 1- Series can be optioned out with a fair amount of luxury equipment. Each version can be had with power leather seats, auto dimming mirrors and a cold weather package which adds seat heaters and a ski pass-through from the trunk. A navigation system, iPod adapter and satellite radio are also available. The car is outfitted with 17-inch wheels, but these can be upgraded to 18-inches – provided you pay extra for tires. BMW’s performance division is also in on the 1 Series act, and buyers can outfit their car with a carbon fiber strut brace, exhaust system or sport steering wheel right from the factory.

The 1 Series seems poised to make car buyers forget about the only other hatchback ever imported by BMW to North America, the 318ti. The 128i and 135i are much better looking, offer greater performance and seem to have tapped in to a vein of deep driver interest both from current BMW owners and those looking to join the German car family.