Debuts At The Paris Motor Show

Now, what vehicle could we be talking about with an impressive number like that? A diesel heavy-duty pick up? No. Try a Bentley. Yes, the British luxury brand has announced a new model that produces all of that torque.

The 2015 Bentley Mulsanne Speed takes the standard 6.75L, twin-turbocharged V8 engine and replaces the combustion chamber, spark plug position, inlet ports, and fuel injectors. The engine also features a revised variable valve timing system and turbocharger setup. These changes mean the Mulsanne Speed produces 530 horsepower and 811 pound-feet of torque, increases of 25 and 59 units respectively. Bentley quotes a 0-60 mph time of 4.8 seconds and a top speed of 195 mph, unknown terrority for a vehicle that tips the scales at 5,976 pounds. A recalibrated eight-speed ZF transmission has be installed to deal with all of this power. Despite the power increase, Bentley claims the 6.75L V8 is 13 percent more efficient than the outgoing 2014 Mulsanne.

On the outside, the Mulsanne Speed gets a few styling touches to differentiate it from a standard Mulsanne. Those touches include a dark-tint finish throughout the front fascia and on the taillights; directional 21-inch wheels, and the choice of four new colors; Spectre, Candy Red, Camel, and Marlin. Inside, the Mulsanne Speed will have carbon fiber trim as an option and come equipped with the requiste Mulliner Driving Specification, which adds diamond-quilted leather door panels and seats, embroidered Bentley emblems, a leather headliner, and organ-stop ventilation controls.

Bentley will show off this quick Mulsanne at the Paris Motor Show, with models arriving at dealers sometime this winter. 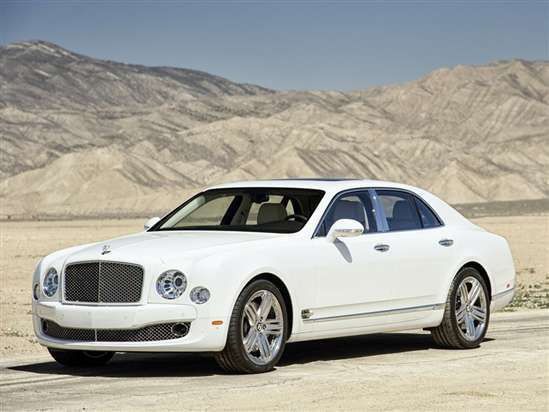