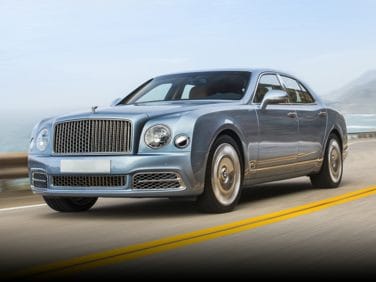 All About Bentley Mulsanne

Bentley's Mulsanne is the flagship marque’s flagship model, as well as its largest sedan. Given the nature of Bentley’s motorcars and their predilection for combining outstanding performance abilities with incredibly decadent luxury appointments, you’ll expect the Mulsane to be one seriously extraordinary automobile—and you’re right.

To fully understand the Mulsanne, you’ll need to know a bit of history. For a number of years, Bentley Motors was basically the bastard step-child of Rolls-Royce Motorcars. In fact, under the ownership of Rolls-Royce, the previous iteration of the Mulsane was little more than a warmed-over, dumbed-down version of the Rolls Royce Silver Spirit/Silver Spur model introduced in 1980. Running from 1980 to 1992, this version of the Mulsanne was also the basis for the flagship model following it—the Bentley Arnage.

Of course, saying they were warmed-over dumbed-down versions of Rolls-Royce models still says they were really nice cars, however they were devoid of the nature of the personality with which Bentley Motorcars had been infused since W.O. Bentley first appended the flying “B” logo to his winning racing cars back in 1919. Through a series of unfortunate events, Bentley’s chief rivals at Rolls-Royce got control of his company in 1931.

This ended in 1998 when the Volkswagen Group got Bentley, but lost Rolls-Royce to BMW. VW introduced the first all-new Bentley flagship to be designed independently of Rolls-Royce in over 80 years—the 2011 Bentley Mulsanne. Appropriating the name of the fastest stretch of the LeMans racing circuit, the Bentley Mulsanne was named to honor W.O.’s five LeMans victories.

While easily rivaling the Rolls-Royce Phantom in appointments, the Bentley Mulsanne absolutely decimates the Rolls-Royce model in terms of performance. Boasting a 505 horsepower, 6.75-liter twin-turbocharged V8 engine, the Bentley makes a heart-shuddering 752 ft-lbs of torque. This power is ported to the rear wheels by way of an eight-speed automatic transmission with—get this—paddle shifters on the steering column.

Even with all of that focus on performance, the car is also a paragon of luxury. The Bentley Mulsanne features hand rubbed wood veneers, wool carpeting, supremely supple leather upholstery (for practically every surface of the car not finished with wood) and pretty much every high tech accessory available for modern automobiles. To say the Bentley Mulsanne represents sheer unadulterated opulence would be the epitome of understatement. Of course, at this level of the game, customization is a given too. To that end, Bentley offers a very long list of features the well-heeled Bentley customer can select from to make their Mulsanne uniquely their own. Although frankly, given the over 300 grand price of entry, it isn’t as if they’ll really have to worry about seeing another car just like their Mulsanne on the road.