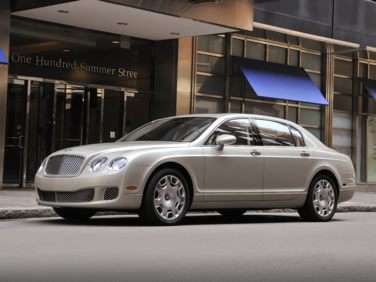 All About Bentley Continental Flying Spur

The four-door sedan version of the Bentley Continental GT, the contemporary Bentley Continental Flying Spur is the continuation of a line of cars dating back to 1957. For the record, the Continental Bentleys were so named because of the fact they were designed primarly for use on the European continent, more so than the island upon which Great Britain resides.

Further, this line of Continentals marks the first Bentley models to be produced independently of Rolls Royce since 1931. Bentley started out as an independent company, but through several twists of fate wound up being owned by its rivals at Rolls-Royce. Rolls essentially conscribed the long vaunted marque to a hand-me-down relationship. For many years, Bentley models were nothing more than warmed-over slightly de-contented Rolls-Royce models.

Volkswagen eventually got ownership of Bentley, ironically as it lost control of Rolls-Royce to BMW. The Volkswagen Group then proceeded to turn Bentley into a Rolls-killer. They did this by delving back into Bentley’s heritage as an extreme performance luxury automaker whose wares were just as powerful and capable as they were opulent. Thus today’s Bentley, while a genuine competitor to Rolls in every measure, also surpasses the venerable marque on the performance front.

The second "new" Bentley model introduced after VW took over responsibility for Bentley Motors, the Flying Spur is in many ways quite similar to the Continental GT coupe. As this is written, the Flying Spur’s power comes from a 616-horsepower twin turbocharged 12-cylinder engine displacing 6.0-liters. With 590 ft-lbs of torque, the engine is capable of accelerating the 5,451-pound all-wheel drive sedan from zero to 60 in 4.3 seconds through an eight-speed automatic transmission. Top speed is quoted at 200 miles per hour.

Standard features of the Bentley Continental Flying Spur include genuine wood, wool, and chrome, along with every contemporary comfort and convenience item you can think of. The materials found within the passenger compartment of the Continental Flying Spur are all natural for the most part and everything the occupants of the car come into contact with is of the earth.

At the 2013 Geneva Motor Show, Bentley Motors revealed the 2014 Bentley Flying Spur. The detail oriented among you probably noted the word “Continental” was omitted from that phrasing. This is because moving forward the Continental name will refer only to the two-door coupe and convertible versions of the Bentley. The sedans will henceforth be known as the Bentley Flying Spur.