Chris Long is the son of Pro Football Hall of Fame inductee Howie Long, but if you think for a second that Chris has let that define him, you don't know Chris Long. No, Chris Long is the guy who finished his last year of college as the top defensive end in the nation. Chris Long is the guy whose #91 was retired at the University of Virginia before the last game of the season, making him the first player at that school to have his jersey retired while still active. Chris Long is also that guy who went #2 in the 2008 NFL draft. Feel us on this one? One day they are going to describe Howie Long as Chris Long's father. The best part is, Chris is barely into his first season with the St. Louis Rams and he's already getting his ride collection right. With that, another MyRide With.

MyRide: What was your very first car and favorite memory of it?

Chris Long: My first car was a Ford F-150, a truck, and I guess my favorite memory was just not having to drive around with my parents anymore!

MyRide: What is your current car situation? Any modification work?

Chris Long: I have a Hummer H2, a Cadillac DTS, and a 1983 Mercury Grand Marquis. I got the Grand Marquis because I wanted to fix up an old car, but the Hummer is what I've put the most energy into. Lots of modifications and it's sitting on 26's. The DTS, I love for its smooth ride.

MyRide: We saw this video of you on YouTube at the AM General / HUMMER Driving Academy this summer, what was your favorite part of that experience?

Chris Long: Cool to be able to go off-road in the Hummer, really felt like you were able to do something with the vehicle that most owners might not have the opportunity to do. The part I liked most was that you didn't have to worry about getting hurt or hurting the vehicle. [click picture below for video of the event] 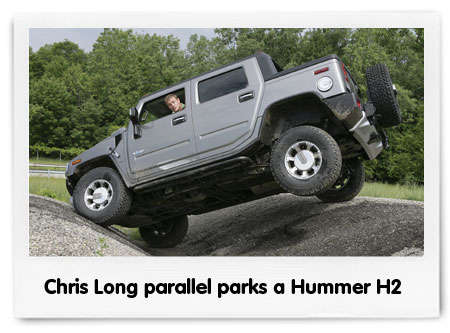 Who had the tightest car in the Rams' spring-training lot?

Chris Long: Probably Pisa [Tinoisamoa], the linebacker. I think he has a Maserati. I was actually a little disappointed with the guys' creativity this year. I'm going to have to shake things up, bring some old school rides in there.

On the day you retire, what is the one car you hope is in your collection?

Chris Long: Definitely a Lincoln Continental, maybe a '67. I think one of my boys has one in black.

As a kid, what is the most memorable car you remember your dad [Pro Football Hall of Fame inductee Howie Long] bringing home?

Chris Long: My dad wasn't a big car guy, he kept it pretty vanilla. We had a Chevrolet Suburban, bright red, for like 14 years. We made all our road trips in the Suburban, so that would probably be my favorite.

The MyRide Last Word
"...a little disappointed with the guys' creativity..." We are delighted that Chris Long's high standards extend off the field into the parking lot as well. His taste for old-school rides reminds us a lot of former New York Giants player Michael Jennings, who's made a nice side business for himself customizing other NFL players' cars. Finally, in case you were wondering, you don't have to go pro to attend the Hummer Driving Academy (but you do have to own a Hummer). Best of luck Chris, and keep it locked on MyRide.