In the increasingly crowded alternative-fuel vehicle segment, buyers can choose among a host of gas-electric hybrids, purely electric cars, and plug-in hybrids (models that split the difference between the two). Many of these models make you compromise: giving up peppy acceleration or a spacious interior to get better mileage, enduring the “range anxiety” of an electric car to eliminate gas from your life, accepting a plug-in hybrid's short electric range to have a gasoline engine on board, or paying a small fortune to meet all your needs.

The 2019 Chevrolet Bolt EV is a model that tries to minimize compromise. It’s an all-electric vehicle with an especially long range, an attainable price, and lots of interior space. These are among the advantages that have drawn AutoWeb users to seek out more price quotes for the Bolt than any other alternative-fuel vehicle, which wins it our AutoWeb Buyer’s Choice Best Alternative Fuel Award. Here are more of the Bolt advantages that these buyers are appreciating.

10) It never burns any gasoline.

10) It never burns any gasoline.

While many alternative-fuel vehicles include a gasoline engine in addition to their electric components, the Bolt is a pure electric vehicle — not to be confused with the Volt plug-in hybrid. The Bolt never burns any gasoline, only consuming electricity from the grid.

That means it has no tailpipe emissions that can worsen the air quality of a crowded city, and that many buyers can further reduce their carbon footprints by charging their Bolts using clean and renewable electricity. There’s also a simplicity to pure EVs like the Bolt — you don’t have to lug around the extra weight of an engine, and never need to worry about oil changes.

When you buy an electric vehicle, you want as much information as possible about your energy usage. Not only do you want to ensure that you’re using your eco-friendly car in an environmentally responsible way, but you want to keep an eye on your remaining range to ensure you can get where you want to go.

The Bolt gives you access to troves of information, attractively presented on the dashboard touchscreen and around the gauges. You can track your energy usage by category (for example, how many kilowatt-hours were from driving your Bolt versus running its heater or air conditioner), or by time. You even can have the car rate your eco-driving practices. And it’s always clear how far you can go before you need to recharge.

A number of alternative-fuel vehicles are available only in certain parts of the country, often California. That’s fine for our readers in the Golden State, but the rest of the U.S. has less selection.

The Bolt is one of the electric cars that’s available nationwide, and Chevrolet boasts one of the country’s largest dealer networks. You can buy a Bolt in Los Angeles and Boston, but also in Ozark, Montana; Anchorage, Alaska; and Elizabethtown, Kentucky (some of the places where we happened to find Bolts in dealer inventories as of this writing), among hundreds of other locations. And even if you don’t have a Bolt in stock locally, your nearest Chevy dealer likely is certified to sell and service it if you special-order one or have it shipped from another dealership.

Some folks think of alternative-fuel vehicles as sad economy cars with wheezy engines and lackluster driving dynamics. A few models admittedly have matched that description, but the Bolt isn’t one of them. It can rocket from zero to 60 mph in under seven seconds, accompanied by a mild-mannered electric whir. The Bolt also boasts a smooth ride, responsive steering, and composed handling.

A less conventional way that the Bolt is fun to drive is its adjustable regenerative braking. Like other hybrids and electric cars, the Bolt can recapture energy from the braking system, partially recharging the battery while you drive. Using a paddle by the steering wheel, drivers can set up their Bolts to brake heavily as soon as they lift their foot off the accelerator — allowing “one-pedal driving” with little need to touch the brakes, and maximizing regeneration — or to maintain momentum and coast more like a conventional car would.

6) It has a high seating position and big windows.

6) It has a high seating position and big windows.

The Bolt’s sporty but refined driving dynamics are just one way it avoids feeling like a cheap economy car. Another is the high seating position. It’s seating position is more like an SUV than a little hatchback, which helps visibility and makes it easier to get in and out of the vehicle. Big windows also ensure that the driver has a good view of his or her surroundings.

The high seats also contribute to the Bolt’s space efficiency, providing extra leg support for passengers in the front and rear. Four adults can sit comfortably in the Bolt, and even a fifth wouldn’t be miserable.

Thanks to its high roof and no need to make room for an engine or transmission, the Bolt offers generous total interior volume for its size. That doesn’t just help the car’s seating, but also its cargo capacity.

The Bolt offers total capacities of 17 cubic feet behind the rear seat and a whopping 57 cubic feet with the rear seat folded down. That’s a tremendous amount of room for any car, and it makes the Bolt an especially functional alternative-fuel vehicle.

As with other all-electric vehicles, the Bolt qualifies for a $7,500 federal tax credit. Many states also offer additional tax credits or other incentives, such as the right to drive solo in a carpool lane.

The Bolt isn’t cheap for a compact hatchback, with a base price of $36,620. Even many other electric cars cost less. But federal and state incentives can remove much of the sting associated with buying one.

3) It gets the equivalent of 119 miles per gallon.

3) It gets the equivalent of 119 miles per gallon.

The EPA rates electric cars for “MPGe” — miles per gallon equivalent. It translates gasoline usage into electricity consumption. By this metric, the Bolt gets 119 MPGe, which works out to twice the fuel economy of the thriftiest gas-electric hybrids (excluding the EV-like plug-in models). And, of course, that efficient consumption also involves no tailpipe emissions.

It’s not only about the environment. Although the final bill will depend on your local electricity rate, the EPA estimates that the average Bolt owner will spend $0.92 to travel 25 miles. For you to pay that little even with a hybrid that gets 50 mpg, gas prices would need to drop to $1.84 per gallon. As with most alternative-fuel vehicles, the Bolt is maximally efficient around town, where it can more often use its regenerative braking — the opposite of gas-only cars, which use the most fuel in stop-and-go conditions.

There’s a reason that the Bolt isn’t the least expensive electric car you can buy: Chevrolet has given it a far superior range - 238 miles per charge - to nearly every competitor, most of which top out at 150 miles or less. That range means you can take your Bolt on longer trips, or not worry as much if you have to skip a charging session.

Recharging the Bolt at a regular 120-volt household outlet adds about four miles of charge per hour, which is enough to top off the car overnight after a day’s commute. If you’re in more of a hurry, a 240-volt car charger — available for in-home installation or in public charging stations — provides about 25 miles of range per hour. And with the optional fast-charging system, certain public stations can rush to 90 miles of range in 30 minutes.

1) It is an all-electric car that can do it all.

1) It is an all-electric car that can do it all.

A growing number of electric cars are serviceable for eco-friendly, extra-affordable commuting and errands. The Bolt’s long range and spacious interior make it more broadly useful as a family car, and should ease shoppers’ traditional concerns about “range anxiety” with pure electric vehicles. Meanwhile, its pleasant driving dynamics and well-executed technology make it an enjoyable partner to any driving conditions.

Overall, the 2019 Chevrolet Bolt EV combines the range of a high-end Tesla with the value and functionality of an economy car, along with the cargo volume of a crossover, and the easy nationwide availability of a regular Chevy. We’re not surprised AutoWeb users are so interested in price quotes to learn just how well the Bolt’s math will work for them. 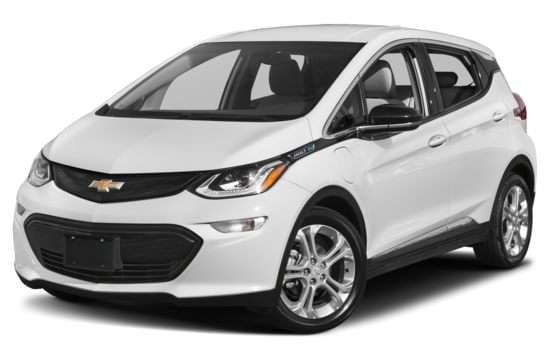