Fashions come and go, but the 2019 Cadillac Escalade remains a statement of luxury, class, and power. Musicians, athletes, entertainers, business executives, and politicians have all adopted the Escalade as a symbol of success. Even when Cadillac’s stewards did their best to dismantle the brand’s ties to the past, dropping the classic names like Sedan de Ville and Eldorado in favor of alpha-numeric monikers like CT6 and XT4, the Escalade name still stood for something, and it survived. And with the majority of luxury suv shoppers choosing the Escalade, it continues to thrive today.

Cadillac was founded by Henry Leland, William Murphy, and Lemuel Bowen in Detroit, Michigan, in 1902. Named for the founder of Detroit, Cadillac rose from the ashes of Henry Ford’s first car brand, the Henry Ford Co. Cadillac joined General Motors in 1909, and it's one of GM’s four remaining U.S. brands, along with Buick, Chevrolet, and GMC.

Over the decades, Cadillac became known as the “Standard of the World,” hitting its peak in the decades after World War II. Though the late 20th century was a hard time for Cadillac (and General Motors), the last decade or two have seen a resurgence in Cadillac’s image. The Escalade has been a leader for the brand since its inception. The 2019 Cadillac Escalade is part of the fourth generation of production, which started with the 2015 model year.

9) The Escalade's style is unmatched.

9) The Escalade's style is unmatched.

While the 2019 Escalade shares a platform with GM’s other full-size SUVs (the Chevrolet Tahoe and Suburban and the GMC Yukon and Yukon XL), it has a unique look that is more upscale and distinctive than its stablemates.

A bold grille announces the Escalade’s arrival, boasting a big version of the brand’s crest at center. Vertically arrayed LED headlights dress the outer edges of the fascia, and LED running lights add to the signature lighting. Starched body sides accented with a crisp shoulder line and fold-away running boards join tall wheel arches. Vertical LED taillamps echo the headlights, leaving bystanders little doubt that a group of VIPs has just left them in its wake.

The current SUV trend rushes toward car-based unibody construction. This style of frameless design has its advantages in terms of weight reduction and packaging, but it loses some of the capability and character of traditional body-on-frame vehicles, as the Escalade demonstrates.

Body-on-frame is exactly as it sounds — a steel frame forms the basis for the Escalade, and suspension, powertrain, and body parts are attached to it to give structure. The resulting vehicle is strong and durable. It can handle a heavy, high-output engine, and it's very repairable in minor accidents. Body panels can be removed and replaced; frames can be straightened and aligned. Body-on-frame SUVs can withstand more rigorous off-road and rough road conditions and are generally more robust than unibody vehicles. The Escalade takes advantage of all of these characteristics.

7) It treats all three rows to luxury, comfort, and convenience.

7) It treats all three rows to luxury, comfort, and convenience.

If you have to transport up to eight people in comfort and style, the Escalade should be on your list. With genuine three-passenger seating in rows two and three, Escalade has hip, shoulder, leg, and headroom to allow for comfortable travel.

The front row gets 12-way power-adjustable heated and cooled leather seats. The second row of seats is also heated, and it folds and tumbles forward to provide convenient access to the third row. The third row comes with standard power folding, leaving a flat load floor when not in use. Multiple storage compartments and cubbies are provided for each row.

6) It can haul a half-ton of cargo — literally.

6) It can haul a half-ton of cargo — literally.

Cadillac doesn’t ignore the “Utility” part of the SUV equation in the Escalade. One of the big reasons that buyers give for selecting an SUV is cargo-carrying capability.

The Escalade can handle 15.2 cubic feet of luggage behind its third row. Fold down the seats, and you open up 51.6 cubic feet of space. Fold both second and third rows flat, and a 94.2 cubic foot cargo hold is yours to fill, up to 1,460 lbs worth. The extended-length Escalade ESV version is even bigger — 39.3 cubic feet, 76.7 cubic feet, and 120.9 cubic feet behind the third, second, and first rows, respectively. When properly equipped, the Escalade can also tow up to 8,300 lbs. That’s Utility with a capital “U.”

5) It's equipped with a massive V8 gasoline engine.

5) It's equipped with a massive V8 gasoline engine.

Cadillac doesn’t fool around with turbochargers, superchargers, and other gimmickry under the Escalade’s big hood. Ever hear the old saw “there’s no replacement for displacement”? Folks were talking about Escalade’s standard 6.2-liter V8 engine hooked up to a 10-speed Hydra-Matic automatic transmission with either rear-wheel drive or all-wheel drive.

The big engine uses direct gasoline injection with Active Fuel Management, capable of shutting off cylinders during low-demand situations to save fuel without a performance penalty. Two valves per cylinder with variable valve timing help squeeze power from the gasoline, to the tune of 420 horsepower and 460 lb-ft of torque. The Escalade's gas tank can hold 26 gallons of go juice, while the Escalade ESV has a 31-gallon capacity. The EPA estimates the 2WD Escalade can achieve 14 mpg in the city and 23 mpg highway, or 14 city/21 highway with 4WD.

4) The ride is surprisingly smooth and compliant.

4) The ride is surprisingly smooth and compliant.

Even though the Escalade is built as a body-on-frame SUV, it rides like a feather thanks to its sophisticated Magnetic Ride Control, a standard feature on all trim levels. Magnetic Ride Control is a GM system that was first used on the Chevrolet Corvette. It uses sophisticated shock absorbers that are filled with magnetorheological fluid, a mixture of magnetized iron particles in a synthetic hydrocarbon oil. Two electromagnetic coils inside the shock tube are actuated by sensors in response to road conditions in real time, dynamically changing the viscosity of the fluid instantly and continuously.

So, when you hit a big bump, the shock stiffens to absorb the jolt and then softens again on rebound. The result is a smooth ride at all times, with no mechanical parts or valves to move or wear out over time. Computers control and tune the system continuously for amazing performance.

3) It's loaded with infotainment technology.

3) It's loaded with infotainment technology.

luxury suv buyers expect to find a boatload of infotainment features, both standard and available, and the Escalade does not disappoint. Standard Bose Centerpoint Surround Sound with 16 speakers provides the soundtrack, with Bluetooth hands-free and audio streaming included.

The Cadillac User Experience (CUE) infotainment system, navigation, wireless charging for compatible smartphones, and Wi-Fi capability for up to 10 devices are also in each Escalade, as is a surround-view camera for easy parking. Available options include a full-color head-up display and a rear entertainment system with dual DVD screens. Standard OnStar and Cadillac Connected Services are also standard, further extending the Escalade’s connectivity and capability.

2) The Escalade can be stealthy, or it can drip with bling.

2) The Escalade can be stealthy, or it can drip with bling.

One of the reasons the Escalade is popular with such a wide demographic is its chameleon-like ability to convey subtle elegance or outrageous opulence, depending on how it is dressed and accessorized.

The stock Escalade is fairly understated for a luxury suv. Twenty-inch dual seven-spoke alloy wheels with chrome finish are standard on the base model, while 22-inch wheels are available in a variety of finishes. The difference in wheel sizes makes a dramatic contrast to the overall look of the vehicle. A Radiant Package adds chrome everywhere. Nine factory exterior colors are available. Accessory grille fillers, wheel locks, and other sparkly pieces are available from the factory and from an active aftermarket.

1) It's available in four trim levels and two sizes.

1) It's available in four trim levels and two sizes. 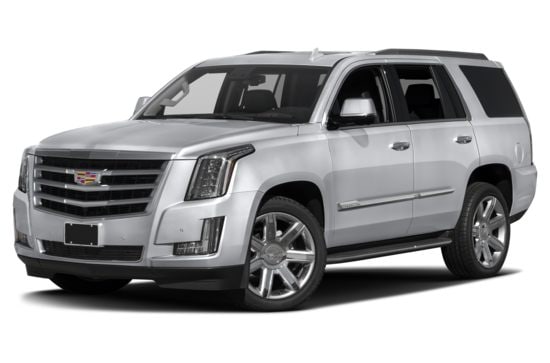