The 2016 Audi TTS is the perfect illustration of just how much the German brand has evolved over the course of the past two decades. When the original TT went on sale in 1998, it was a pure styling exercise that made use of the Volkswagen Golf's sturdy bones to present a sleek, futuristic coupe that didn't deviate all that much from the TT concept car of a few years before. Easy on the eyes but less than engaging out on the road, the first-generation TT indicated that Audi was about to turn an important corner in its quest for luxury credibility.

For 2016, some of the details remain similar - the Audi TTS sits on the same MQB platform used by a plethora of VW and Audi products, including the Golf - but the end result is a coupe that has left the original TT's pretty face on the shelf. Instead, the new sharp-angled TTS encapsulates the marriage of design and performance that has come to define Audi's modern line-up, and it manages to do so without asking buyers to tolerate daily sturm und drang to get their fun-to-drive fix on the weekends.

If you've got a world-beating exotic demi-god in the showroom - like Audi does with the R8 supercar - it behooves you to let it cast a fairly long shadow on the styling of its lesser siblings. It took a few years for the R8 and the Audi TT and TTS to sync up their design cues, but it was worth the wait. The TTS has seen its baby fat sliced off with the precision of a laser scalpel for its 2016 refresh, with past rounded edges now razor sharp and a once-domed roofline stretched to amplify its muscular character. Featuring a longer front deck, sloping silhouette, and a prominent crease running down either side of the car, the 2016 Audi TTS mirrors its larger sibling's call to action and quickens your pace as you walk towards it in the parking lot after a long day at work.

Of course, the 2016 Audi TTS' great leap forward doesn't begin and end with its sheet metal. Further proof of Audi's high tech investment in the entry-level sport coupe can be found sitting directly in front of the driver in the form of the brand's Digital Cockpit. Essentially, the Digital Cockpit consists of a 12.3-inch LED screen that is responsible for almost every vehicle function. Navigation, entertainment, vehicle data, it all falls under the purview of the massive display, which is interacted with via steering wheel buttons and toggles or the rotary MMI controller that sits on the center console.

The display is stunning in terms of detail and color, and the ability to bring individual elements to the fore as you need them works well in practice (with important information such as vehicle speed, fuel, etc, always available to the eye). Where the Digital Cockpit becomes a bit of a liability is when it's time for the passenger to try to use any aspect of the Audi TTS' infotainment or nav systems. You see, that foot-wide screen got so big by devouring the "traditional" center stack display - there's none available - forcing right-seat riders to lean way in when it's time to enter a destination or scroll through radio presets. I actually had to deal with this problem while trying to properly configure the navigation map on a road trip, and several miles were spent shoulder-to-shoulder with my passenger while we explored the intricacies of the Audi's menu system.

The lack of a screen perched on the 2016 Audi TTS' dashboard goes a long way towards informing the "less is more" feel of the coupe's interior design. Audi has camouflaged the climate controls by secreting them inside the center hub of each circular air vent, complemented by a short toggle bar for miscellaneous features hung under the dash just above the console. The clean look of the cabin is accented by soft-touch plastics and finely-quilted leather on the front buckets, which of course are fully power operated.

There's a rear seat in the Audi TTS, but I can assure you it's there purely to keep your insurance broker complacent. On a trip back from a winter rally school a friend had the misfortune of hitching a ride with me back to Montreal, Quebec, and as the third wheel had to squeeze his six-foot frame across the entire back row for more than two hours (losing sensation in his legs after one). I will say this: on that trip the TTS was called upon to swallow a substantial amount of overnight luggage its trunk, which measures 12 cubic feet.

I've already mentioned that the 2016 Audi TTS benefits from Volkswagen's new MQB platform, which brings with it numerous weight-reducing and space-maximizing benefits. Perhaps most important, however, is that it also opens up the TTS to the same turbocharged drivetrain found in the Volkswagen Golf R hatch and the Audi S3 sedan, which debuted just the year before.

This setup consists of a 2.0-liter, four-cylinder engine that's been tuned to produce 292 horsepower and 280 lb-ft of torque, matched with a six-speed dual-clutch automated manual transmission. Audi swaps its quattro-branded all-wheel drive system in place of the Golf R's 4MOTION arrangement, but by and large the experience is very similar. This includes the presence of launch control, which propels the TTS to 60 mph from a standing start in a startling 4.3 seconds.

On the street, where you're less likely to engage launch control unless sufficiently provoked, the dual-clutch gearbox is a little more frustrating off the line. Like most Audi and VW implementations of the technology, there's hesitation when you dip into the throttle from either a stop or a roll that at times can be a real kill-joy. Having driven traditional manual versions of this 2.0-liter motor in both the Golf R and the S3, I can say the experience is more satisfying with a third pedal in the mix. Still, once underway the automatic behaves like a perfect gentleman, especially at highway speeds.

Docile To Fun At The Flip Of A Switch

Docile To Fun At The Flip Of A Switch

Audi's focus on technological innovation as part of its main marketing message has permeated the 2016 TTS' entire design spec. Shifting from the Digital Cockpit's eye candy to the Audi Drive Select system demonstrates that the automaker has worked hard on building multiple personalities into the coupe's neural net. You get several different drive modes in the TTS, including Comfort, Dynamic, and Individual, with the latter allowing owners to customize steering feel, shift firmness, throttle response, adaptive suspension stiffness, and even how aggressively the all-wheel drive system handles torque distribution.

With Comfort calling the shots, the Audi TTS sails down the road on a much more comfortable cushion than one would expect from such a small, sporty car. Flip to Dynamic - my preferred Audi attitude - and body roll vanishes, gear ratios are swapped with ultra-rapid precision, and the electric power steering adds the weight that automakers seem to feel best stimulates aggressive driver. If you turn the traction control off, the TTS will even hang its tail out in the snow once sufficiently prodded by your right foot (thanks to a rearward torque bias). It's a digital makeover that speaks to how tightly-controlled the coupe's every detail really is by Audi's various on-board computer systems.

Not a Pure Sports Car

Not a Pure Sports Car

My previous sentence hints at the 2016 Audi TTS' place in the world of high performance automobiles. Yes, you can turn off the nannies and cut loose in the coupe should you so desire, but you'll always be able to call on its outstanding all-wheel drive grip, its supernatural ability to shuttle torque to exactly the correct wheel, and the lightning-fast reflexes afforded by its magnetically-controlled dampers should things get too out of hand. In fact, you're never really near the edge of the Audi TTS' envelope, as the car surrounds the driver in an ultra-rapid, yet well-defined software bubble.

I'm not complaining. The TTS is an excellent option for anyone who's enamored by the idea of a sports car but who has no interest in enduring a punishing ride or worrying about snap-oversteer on a wet road. This Dr. Jekyll's Mr. Hyde has been artificially tamed to the point where he only gets wild when it's totally cool with you, bro. You'll have to nevertheless keep in mind that the ones and zeros required to fabricate this digital leash also have a filtering effect on things like road feel, steering communication, and the immediacy of the moment.

Taking all of the above into account, it becomes clear that the 2016 Audi TTS is a unique contender in the entry-level luxury coupe arena. Yes, you can get all-wheel drive with the BMW M235i, but it's not nearly as granular as Audi's quattro when it comes to calculating your trajectory. The Porsche Cayman is an appealing alternative, provided, of course, you don't need a rear seat and are willing to drop major coin by way of its options list to achieve a similar level of equipment. Then there's the fact that its rear-wheel drive, mid-engine setup lacks the computerized control over lap times and cornering apexes, relying instead on its fantastically neutral balance. The trio present three distinctive answers to the sports car question, but the Audi is definitely the least traditional and most curated of the group in how it articulates itself out on the road.

There's one more competitor to the 2016 Audi TTS that I haven't mentioned, and it's sitting across the showroom floor. The base Audi TT also offers a turbocharged four-cylinder engine, although it manages just 220 horses and 258 lb-ft of twist from its two liters of displacement, and it comes with a similar dual-clutch and quattro all-wheel drive arrangement. Strictly from a performance standpoint, the TT's numbers are no match for its S sibling, but stylistically - and philosophically - they are similar cars. If you don’t need the all-out aggression of the TTS in your day-to-day life, and can stand for dialed-down dynamics in the corners, the TT presents itself as a compelling alternative (and one that will save you nearly $9,000 off of the TTS' $51,900 asking price).

Cons:
•    Offers a "curated" driving experience
•    Dual-clutch transmission can lag at low speeds
•    No manual gearbox available
•    Somewhat thirstier than its 25 mpg combined rating in real-world driving
•    Lack of center screen makes it hard for passenger to interact with navigation and entertainment features 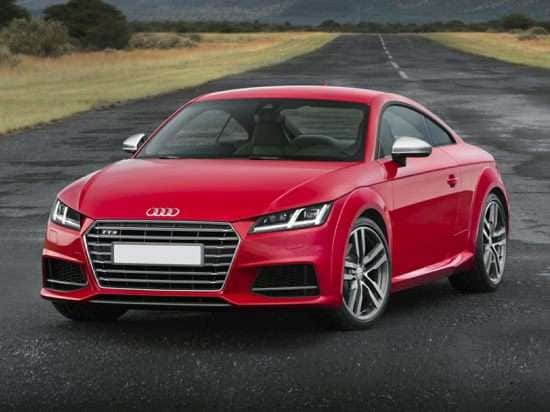