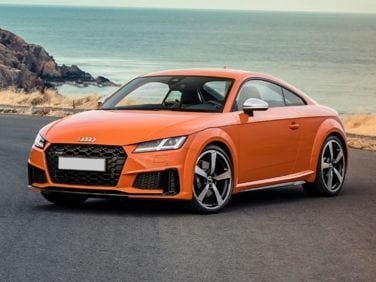 All About Audi TTS

Audi offers the TT coupe and roadster with a factory-tuned S model for improved performance. The biggest difference of the Audi TTS coupe and roadster is found under the hood. The TTS uses a retuned version of the base 2.0-liter TSFI engine that is capable of 265 horsepower and 258 lb-ft of torque. The turbocharged inline-4 in the TTS has a gain of 65 horsepower and lb-ft of torque over the base TT 2.0 TFSI. While the standard TT 3.2 is already quick with the ability to accelerate from 0-60 miles per hour in 5.3 seconds, the TTS models can reach the same speed in just 4.9 seconds – the same as the Mercedes-Benz SLK55 AMG. Despite the quick acceleration and 155-mph electronically controlled top speed, the TTS is capable of EPA fuel economy estimates of 21 miles per gallon in the city and 29 mpg on the highway. Visual improvements come from a more aggressive front fascia and side sill effects, new Bi-Xenon headlamps with LED running lights, unique 19-inch alloy wheels and quad outlet dual exhaust integrated into the rear diffuser. Increased downforce is achieved through a pop-up rear decklid spoiler. Audi’s Magnetic Ride Control improves upon the car’s handling by providing suspension damping that quickly and automatically tunes itself to changes in driving conditions. The TTS coupe and roadster went on sale late in 2008 with starting MSRPs of $45,500 for the TTS coupe and $47,500 for the TTS roadster.