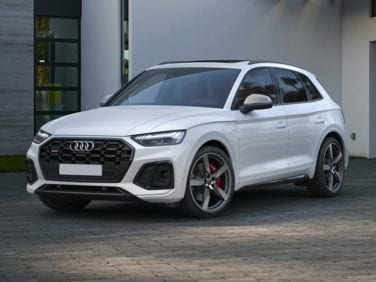 All About Audi SQ5

That’s not to say the Audi SQ5 is not available elsewhere in the world. It is. In fact, it was available on its home continent of Europe, and lusted after from afar, before the Detroit 2013 announcement. But the Audi SQ5 in Europe is known primarily for its front-mounted TDI drivetrain, a 3-liter V6 turbodiesel that yields 313 horsepower. It was the first Audi model with the S designator that was engineered to take advantage of a diesel engine’s capabilities. The Audi SQ5 went on sale in Europe in early 2013. Audi also designed a special edition of the SQ5, limited to 50 units, that also went on sale early in the car’s debut year. It featured an exclusive blue exterior finish as well as a special interior.

The Audi SQ5 TFSI’s impending arrival in the United States was the most important part of the 2013 Detroit auto show reveal The fact that it will feature a gasoline drivetrain, not a diesel one, was the second most important part of the announcement. Instead of the 3-liter V6 turbodiesel, the new version of the Audi SQ5 was slated to get a 3-liter V6 supercharged gasoline unit that is capable of producing 354 horsepower. It is similar to the base gasoline version of the Audi S5, which gets a 272-horsepower 3-liter V6, without any boost. Audi’s statistics for the SQ5’s gasoline drivetrain say it’s good for a 0-62 acceleration time of 5.3 seconds and an electronically limited top speed of 155 miles per hour.  The TFSI version of the SQ5, like the Q5, gets a torque-converter eight-speed automatic transmission, and it’s all-wheel-drive thanks to Audi’s quattro system. Audi also announced that the SQ5 TFSI will be available in other global markets, such as Canada, Mexico, Brazil, Argentina, Chile, Russia, Ukraine, Japan, Singapore, China, and South Korea.

When the Audi SQ5 arrives in the United States, it will come bearing 20-inch wheels, although buyers can opt for a 21-inch wheel if they prefer.  The Audi SQ5 also has an S-trim exterior package that distinguishes it from the Q5, a quad-tip exhaust system, Xenon headlights that feature Audi’s telltale LED running lights, and a panoramic sunroof.