Within the luxury sedan classes, a new niche of vehicle is emerging, one that looks sportier and offers greater performance but which still isn’t, to borrow a phrase, the ultimate driving machine of the lineup. For example, Lexus has begun to offer F Sport models as the first stepping-stone to what is expected to be a broader F Performance lineup. Cadillac is introducing a new Vsport collection of models to slot in underneath the V-Series performance variants. Even BMW, purveyor of those self-proclaimed ultimate driving machines, is offering M Sport treatments with cosmetic and performance enhancements that stop well short of the full-on M treatment.

At Audi, the letter signifying hotter models is S, while the performance versions are called RS. I don’t know how you perceive them, but to me these designations carry performance-oriented weight and significance right out of the box. You don’t really need to explain to someone that the S or RS model is the performance version of the A model. Rather, it is inferred. Plus, the letter “S” looks like the type of road these machines are designed to conquer.

By way of this prelude, then, the subject of this review is the 2013 Audi S6. It is a performance-oriented version of the recently redesigned Audi A6, itself a rather accomplished machine, and one that I recall as one of my favorite models in the mid-luxury sedan class. The S6 is an equally compelling automobile, one that pushes all the right buttons for an enthusiast driver seeking seriously speedy, low-profile motoring, and I want one for my own garage. Perhaps in the sections that follow, I can convince you that you want one, too.

My test car’s base price is $72,795, including an $895 destination charge, which is right about where a fully loaded A6 3.0T leaves off. Add Glacier White metallic paint, Carbon Atlas cabin inlays, LED headlights and LED running lights, 20-inch aluminum wheels with performance tires, and a Driver Assistance Package containing power folding exterior mirrors, Audi Side Assist, Audi Pre-Sense Plus, and Audi Adaptive Cruise Control with Stop & Go, and the price rises to $78,670.

Still missing from my test car were rear-seat side-impact airbags, heated rear seats, rear window and rear side window sun shades, a head-up display, Night Vision with Pedestrian Detection, a Bang & Olufsen advanced audio system, and 22-way power front comfort seats with perforated leather, ventilation, and a massage function. Had my car been loaded with all of the goodies, it would have cost about $90,000.

Though the S6 is the performance-tuned version of the A6, it doesn’t scream speed on the outside. In fact, if not for subtle S6 badges on the grille, trunk, and brake calipers, the “V8T” lettering on the fenders, and the big wheel/tire combo, most people wouldn’t be able to tell the difference between the S6 and a regular A6. Personally, I prefer this stealthy approach to performance vehicles, though I know that plenty of people like to proclaim in a louder way that they popped for the most expensive model.

Inside, the Audi S6 is equipped with sport seats that have integrated head restrains and diamond-pattern leather with exposed stitching. Open either of this car’s front doors, and there is no question that you’re about to climb aboard something special.

The S6 comes with super-cool leather sport seats with integrated headrests, diamond-stitched leather, manual thigh adjusters, and embossed S6 logos. Of anything on the car, they are the most obvious hints that this is no ordinary A6.

As might be expected, these seats offer exceptional comfort and support. Fling the S6 through a set of S curves, and you won’t find yourself attempting to anchor your body with your legs, or holding the steering wheel in a death grip to remain in place. In fact, getting these seats is almost worth the S6’s price of entry alone.

With 14.1 cu.-ft. of trunk space, the S6 has more room for luggage than the larger and more expensive S8 model. The trunk is exceptionally deep in terms of the relationship between the rear seatback and the bumpers, and the space is rectangular in shape thanks to the enclosed trunk hinges. The rear seats offer a 60/40-split folding design and a truly enormous ski pass-through that should accommodate sticks for four people.

The S6’s back seat isn’t roomy, but neither is it snug. Passengers sit a little bit low, yet the seat is designed to offer decent thigh support. A 4-zone climate control system allows each rear passenger to adjust the temperature as they see fit. The front seatbacks are pretty hard though, and the seatback nets are unkind to knees and shins, so people with longer legs should be careful when getting in and out.

As an expensive German car, the S6 is loaded with stuff. Instead of boring you with a bulleted list of everything on the car, I’ll praise something, and I’ll complain about something.

My test car had a standard Bose surround sound audio system. It’s not bad. I’ll say this, though. If you’ve got the $5,900 lying around, and you value impeccable audio quality, spring for the optional Bang & Olufsen advanced audio system. It is fantastic.

Now for the criticism. On the center console, surrounding the gearshift, is the Audi Multi-Media Interface, or MMI. The idea is that the driver learns by touch where the buttons and knobs are, eliminating the need to look down to reference the controls before looking at the display screen to execute a command.

Plus, and I know the car’s designers and engineers don’t think anyone ought to be drinking a beverage while driving in the first place, I’ve learned first-hand that if a soda or coffee drink spills on the MMI controls, they get sticky and hard to use.

Audi equips the 2013 S6 with rain-sensing wipers, a reversing camera, and parking assist sensors front and rear. A new Enhanced Audi Lane Assist system helps to maintain lane discipline if the driver begins to weave out of the lane without using his or her turn signal.

Additional safety-related upgrades include Audi Side Assist, Night Vision Assistant with Pedestrian Detection, and Audi Pre-Sense Plus. Audi Pre-Sense Plus prepares the cabin for an impact and provides a 4-phase assisted braking operation to help reduce speed before an impact. An adaptive cruise control system is also available, and includes Enhanced Braking Guard, which can bring the car to a full stop when it is traveling at speeds under 19 mph in order to avoid a collision with a stationary object ahead.

The redesigned Audi S6 had not been crash-tested by the National Highway Traffic Safety Administration (NHTSA) or by the Insurance Institute for Highway Safety (IIHS) as this review was written. The A6 on which the S6 is based was named a “Top Safety Pick” by the IIHS for the 2013 model year.

Previously, I mentioned that I prefer the S6’s subdued appearance over more flamboyantly decorated sport sedans. This is because this car’s got serious hardware designed for serious speed, and I have a serious aversion to speeding tickets. Therefore, I’d rather not advertise a vehicle’s capabilities any more than might be necessary.

For 2013, a twin-turbocharged 4.0-liter V-8 replaces the previous-generation S6 model’s V-10 engine, and Audi says it provides a 25% increase in fuel economy in addition to greater power ratings. Speaking of which, the 4.0T engine makes 420 horsepower and 406 lb.-ft. of torque, which is 110 more horsepower and 81 extra lb.-ft. of torque compared to the supercharged A6 3.0T. And what’s really important is that the torque is available all the way from 1,400 rpm to 5,200 rpm, right about where peak horsepower kicks in. The result is an absolute cascade of power almost from the moment you stomp on the gas.

Power is fed to all four wheels through Audi’s 7-speed S-tronic automated manual transmission and Quattro all-wheel drive. Quattro biases power delivery to the car’s rear wheels under normal driving conditions, and in the S6 a sport rear differential varies the power split from side to side to make the car feel more athletic when powering out of a corner.

The S6’s S-tronic transmission includes a Sport shift program, a manual shift gate, aluminum paddle shifters, and launch control. Audi says the S6 accelerates to 60 mph in 4.5 seconds and, thanks to Cylinder on Demand technology that lets the engine run on just four of its eight cylinders, this car is rated to get 20 mpg in combined driving. I averaged 19.4 mpg with an emphasis on highway driving.

It almost goes without saying that the Audi S6 delivers impressive performance. How could it not, given the hardware underneath it? Put this car on a road that you know exceptionally well, and you’ll find that it covers ground just as fast as – or faster than – many genuine sports cars.

You can even tailor the car’s various components to your very own Individual setting using Audi Drive Select. For daily driving, I prefer the car’s Automatic mode to the Comfort or Dynamic settings, as I find that whatever software Audi is using is smarter than I am at deciding what I need, and when I need it. But out on my favorite roads laced across the Santa Monica Mountains, I twist the MMI dial to the Dynamic driving mode and let ‘er rip.

A genuine thrill to drive hard and fast, the S6 regularly astonishes its driver with unfailingly composed dynamics. Speed is effortless, the drivetrain brutally businesslike in terms of its sheer focus on transferring as much of the power to the pavement as is possible. My test car rode on a set of P255/35ZR20 Pirelli P-Zero summer performance tires, which, in concert with Quattro and the S6’s sports rear differential, utterly refused to relinquish their grip on Mulholland Highway, while simultaneously refusing to squeal despite serious abuse. The car’s sport-tuned air suspension behaves as though concepts such as squat, dive, and body roll don’t exist, and yet the S6 delivers a ride quality that, while firm, doesn’t threaten to fuse the lower vertebrae of passengers.

If I have a complaint about the S6’s performance tuning, it’s that the steering occasionally exhibits artificiality. And if I have a complaint about the S6’s driving dynamics in general, it’s that there is too much road rumble coming up from the tires and suspension, and not enough engine rumble making its way into the cabin. When revved, this twin-turbo V-8 sounds terrific, but the driver can barely hear it. Use the paddle shifters, and the downshift rev matching is almost imperceptible, which made me regularly double check the instrumentation to make sure I had actually executed a downshift.

Otherwise, the only other downside to driving the S6 is that when the Audi Drive Select system is in Normal mode and the driver slows to take a turn, or comes briefly to a stop before executing a turn, and then gets back on the gas to accelerate, there is a delay in power delivery followed by a sudden burst of acceleration. Think of using a light switch to illuminate a room, and you get a sense of this no-power/lots-of-power behavior. Even after 500 miles behind the wheel, this was one powertrain characteristic to which I never quite acclimated.

What I love about the Audi S6, apart from how flippin’ fantastic it is to drive the vast majority of the time, is that it doesn’t make a big deal about its performance mission, or its price tag. This is one luxury sport sedan that is focused on performance, and in a restrained manner. The only observers likely to take note of the S6 are other driving enthusiasts, which is as it should be.

Audi supplied the vehicle for this review 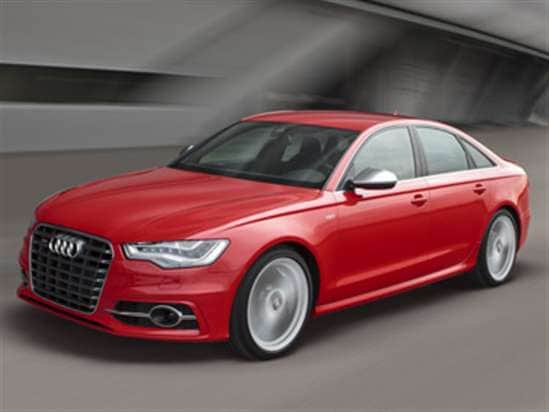