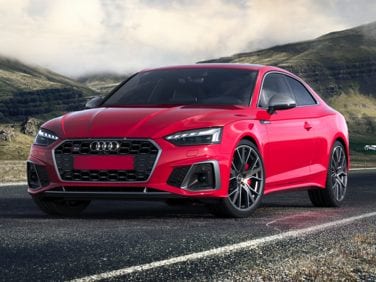 All About Audi S5

As with all of Audi's factory-tuned S models, the S5 focuses on improving performance and style. Adding performance to the already sporty looking A5, the Audi S5 benefits from a 354-horsepower, 4.2-liter V-8 under the hood and a short-throw, six-speed manual transmission, while Audi’s famed quattro® all-wheel drive allows for increased performance and handling. It is hard to improve on the sleek looks of the A5, but the S5 model uses slight changes to signify its sportier DNA. Up front, the reshaped air inlets allow the bigger engine to breathe easier, and the blacked-out grille adds to the aggressive looks. The LED running lights still make the S5 stand out, but adaptive Bi-Xenon headlights are a standard S5 upgrade.

Unique 19-inch wheels are sportier giving the S5 improved visual appeal and a better footprint for the wider performance tires. From the rear, a more pronounced decklid spoiler increases high-speed stability, while the quad outlet, dual exhaust replaces the A5’s single exhaust outlets on each side. Like all Audi S models, one of the most recognizable changes on the S5 is the bright aluminum accents on the door mirrors. Inside the S5, the driver benefits from sportier gauges and an increase in bolstering keeps the front passengers firmly planted in tight cornering. The end result for the Audi S5 is a 0-60 mile per hour run of just 5.1 seconds, according to Audi, and a new look that not only increases the car’s performance, but its overall presence as well.

The coupe is also available as a special performance model known as the S5 4.2 FSI. The S5 replaces the A5’s 6-cylinder engine with a 354 horsepower V8 that is also capable of churning out 325 lb-ft of torque. All-wheel drive is once again standard, and the same transmission options are provided. Fuel economy is lower, coming in at 14 miles per gallon in stop and go traffic and 21 miles per gallon during highway cruising.