The 2015 Audi S3 proves that revisiting a tried-and-true formula from a modern perspective can bear delicious metal fruit.  Realizing the lack of a turbocharged compact sport sedan in its American line-up – a hole that has existed since the Audi S4 was kicked upstairs to larger, plusher quarters about five years ago – Audi has decided to augment its U.S. offerings with the kind of powerful and fun ride that would have previously remained forbidden to anyone outside of the brand’s home market.

In many ways the direct descendent of the original Audi S4 that helped open the eyes of American buyers to the four-season wonder of all-wheel drive performance, the S3 is too laden with technology to be labeled a throwback.  Instead the Audi S3’s rearview mirror is filled not with nostalgia but rather the silhouettes of rivals like the Mercedes-Benz CLA45 AMG and the BMW M235i as the sedan edges out all comers with its unique combination of class, comfort, and kick-ass.

The 2015 Audi S3 starts out in the Premium Plus trim, which features an MSRP of $41,100.  Standard equipment for the Premium Plus edition of the sedan includes a sunroof, dual automatic climate control, 18-inch rims, leather upholstery, heated front seats, and the entry-level audio system paired with Audi's MMI interface.  Moving up to the Prestige trim (MSRP $47,000) gives you a Bang & Olufsen stereo, parking assistance with a rearview camera, a navigation system, and a blind spot warning system.

My tester was an Audi S3 Prestige that had also been equipped with the Advanced Technology package (active lane assistance, adaptive cruise control, and forward collision warning), and the suggestively-named 19" Performance package (19-inch rims, magnetic suspension).  This brought the total window sticker of the car I drove for a week to $49,900.

Based on the also-all-new A3 sedan, the 2015 Audi S3 adds a number of sporty accents to what was already a handsome template.  It’s easiest to pick out the car’s quad exhaust tips positioned on either side of the rear diffuser hanging underneath the S3’s more aggressive back bumper treatment, but there’s also a small spoiler, nicer wheels, and an aero edge to the front fascia that one won’t find on the A3.  As with all S model Audis, the S3 also comes with silver-hued side mirrors.  It’s a very adult-friendly design and to tell the truth from a distance you’ll have a very hard time telling the S3 apart from its bigger S4 sibling; you'll probably have to park them side-by-side to suss out the differences.

Interior appointments are subdued – you won’t find reams of carbon fiber appliqué cluttering up the admittedly plain dashboard’s expanse – but I found it relieving to slip behind the wheel of a small sport sedan that wasn’t constantly screaming in my face that it’s FAST! FAST! FAST!  Perhaps more importantly, the Audi S3 maintains the quality feel of the interiors found in the brand’s larger, more expensive cars, a characteristic that can’t be claimed by all of its similarly-sized rivals.

By choosing a traditional sedan template rather than opting for a ‘four-door coupe’ (CLA45 AMG) or two-door coupe body style (M235i), the 2015 Audi S3 manages to present a level of practicality that isn’t matched by either its Mercedes-Benz or BMW competitors.  If you have to install a child seat in one of these three cars, you’ll want it to be the Audi.  Yes, rear seat legroom and headroom aren’t expansive, but the S3 is palatial in the back compared to the alternatives, with only a somewhat tight trunk spoiling the utility party.

Up front, the vehicle’s leather-clad sport seats adjusted easily while I sought a comfortable driving position, and they’ve got ‘S3’ emblazoned just under the headrests (matched by an S3 badge on the tachometer and flat-bottomed steering wheel).  There’s not a lot of storage space to be had inside the Audi’s cockpit, which means you’ll have to get creative if you want to stow your mittens, phone, and passenger’s phone at the same time.

Much of the 2015 Audi S3’s feature set is lifted directly from the more affordable A3, which had me puzzled as to why, of the nine toggle buttons sitting at the top of my fully-optioned test car’s center stack, four were blank.  Blank buttons make me feel like I’ve cheaped out and forgotten to order a feature that my neighbor will undoubtedly not have overlooked and then rub in my face for the duration of our co-ownership period – and perhaps beyond.

The S3’s primary gateway to its features and systems is the MMI controller, a rotary dial that sits on the center console and which is itself surrounded by a set of toggles and buttons that help you take shortcuts to commonly-used features, as well as navigate forwards and backwards through various menus.  It’s decent in daily use, although the lack of radio/media preset buttons had me scratching my head.  There’s a small LCD display directly in front of the drive (between the tachometer and the speedometer) that can cycle through vehicle data as well as navigation prompts, and entertainment controls, and I particularly liked the LED boost gauge nestled just inside the tach’s binnacle.

Less popular during my time with the Audi S3: the car’s rain-sensitive wipers.  No matter how I tried, I couldn’t get their sensitivity to sync up with the snow that was falling on the windshield, and it was frustrating to be constantly fiddling with the feature's settings.

The 2015 Audi S3 comes with the expected array of airbags - dual forward units, side impact airbags for front passengers, and side curtain airbags - along with multi-stage electronic traction control and stability control as standard equipment.  Depending on how you option the car, you can also equip the S3 with features such as rear side airbags, a lane departure assistance feature, forward collision warning, and a blind spot monitoring system.

2015 Audi S3 Crash Test Ratings: The Audi S3 achieved a score of 'Good' in each important crash test performed by the IIHS, and the NHTSA rates the S3 and its A3 sibling five out of five stars for overall crash protection.

Although the 2015 Audi S3’s four-cylinder motor features the same displacement as the 2.0-liter mill found under the hood of the A3, it was given a significant makeover before being asked to pull S duty.  The changes include a different turbocharger and cylinder head, revised exhaust valves, and strengthened internals, with the results being a 72 horsepower increase over the more pedestrian version of the motor.  In total, the Audi S3 produces 292 ponies and 280 lb-ft of torque, output that is sent to a standard all-wheel drive system by way of a six-speed dual-clutch automated manual transmission.  Fuel mileage for the sedan is listed at 23-mpg city and 31-mpg highway if you can resist car’s amply-boosted charms.

I happen to live in a climate that has been cursed by the elder gods of snow and ice, and as a result I have a special affinity for any all-wheel drive vehicle that values performance as much as I do.  As brilliant as the 2015 Audi S3 was one year ago when I first drove it on the streets of Monte Carlo, a place where fractalized precipitation never troubles its happy residents, it was even better during the week I was able to dance it through the slushy avenues of Montreal.

The S3’s dual personalities of buttoned-down junior executive accessory and wild-eyed turbo hooligan were perfectly illustrated by the two approaches the car offered to fording through the six inches of white stuff that were dumped on my hometown.  Leave the car’s electronic stability control program on and the drive mode set to Normal, and you’ve got an Arctic fox whose surefooted quattro all-wheel drive and confident power delivery ensure constant forward momentum without much need for driver involvement.  Dial back the nannies and swap over to Dynamic mode, however, and you end up with a wild, un-tethered snow missile that wants to kick out sideways around every corner before clawing its way back into its lane for another overboosted forward surge to the next snowbank - I mean apex.

If that doesn’t sound like fun to you, then I’m afraid that whatever you have running through your veins might actually be colder than the wind that froze my scarf to my face last night.  The S3’s excellent chassis and constantly-spooled turbocharged engine were in fact so enjoyable that I was able to overlook the lack of traditional manual transmission on the options sheet (available in Europe, alas), and the occasional hesitation of the S-tronic gearbox at lower speeds.  That reluctance to engage off of the line completely disappears, of course, if you make use of the S3's launch control feature, which allowed a 4.7 sprint to 60-mph even on cold pavement.

As fun as the 2015 Audi S3 was to flog through a winter wonderland, the car is equally rewarding to drive in a responsible fashion.  The adaptive suspension system that was outfitted to my tester masked Montreal's rough roads like a pro, and the S-tronic transmission loved working with the wide powerband of the sedan's turbocharged 2.0-liter motor.  I also enjoyed how solid the car felt, as even the base $41,000 model, which would be my pick, offers excellent build quality and a reassuring 'thunk' when you close the doors.

I loved the S3, and I think if you're careful with the options sheet and avoid straying too far into S4 territory (which starts at $48,400), you'll love this car too.  It's the perfect size for city dwellers, but more than that its compact footprint and modest 3,400 lbs of curb weight make it more fun to drive year-round than any other small car in its segment.  The Audi S3 hits the sweet spot when it comes to entry-level luxury performance: you can choose to pay more for the mightier, yet less practical CLA45 AMG, or squeeze into the also-pricier BMW M235i xDrive coupe and its unusable rear seat, but you simply won't get the same driving satisfaction or class of the well-conceived Audi.

Audi Canada supplied the vehicle for this review 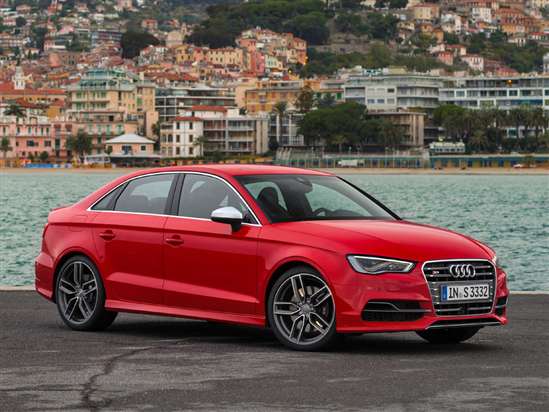