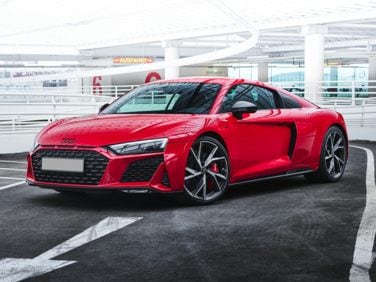 All About Audi R8

The Audi R8 is a two-door, two passenger luxury sports coupe. When Mercedes rolled out the SLR supercar in 2004, neither BMW nor Audi had anything in their vehicle lineups to directly respond. For a time, it appeared as though Mercedes would be able to claim the German high-performance title by virtue of acclimation. That all changed in 2007 when the Audi R8 was announced. Making use of the same platform as the Lamborghini Gallardo, thanks to Audi’s ownership of the Italian brand, the R8 set a new standard for performance and style at the company.

The 2009 Audi R8 continues on as a shining example of the engineering brilliance and performance philosophy evident at the German automaker. This two-door sports coupe displays a menacing, jet-fighter-like appearance, with a protruding snout flanked by huge air intakes built into the rear fenders. The entire visual package is topped off by the glass engine cover which uses integrated LED's to ensure an excellent view of the motor no matter what time of day it may be.

The engine itself is another piece of stunning design. With eight cylinders and 420 horsepower, this 4.2 liter motor makes a maximum of 317 lb-ft of torque. Those numbers are enough to propel the R8 to a top speed of 187 miles per hour. Acceleration is excellent, with 60 miles per hour being reached in only 4.4 seconds and the quarter mile blazing by in 12.7. 8-piston front brake calipers are complimented by 4-pistons at the rear, allowing the driver to exert a death-grip on the discs when it time to slow the R8 down from autobahn speeds. The R8 can be ordered with either is a 6-speed manual transmission or something that Audi calls the R tronic 6-speed semi-automatic. All R8’s come equipped with Quattro all-wheel drive to ensure maximum traction and control at high speeds.

The inside of the vehicle is not nearly as austere as that which is normally found in a supercar. In fact, Audi has gone out of their way to make sure that the R8 stands out as a high performance coupe which also has a somewhat practical side. There is enough space in the storage area behind the front seats for two bags of golf clubs, and leg room for the passenger and driver is excellent. The entire cockpit is finished in high quality materials, and really feels as though it is worth every penny of the very high cost of R8 ownership.

The Audi R8 looks every inch the track-oriented world beater that it is, and the vehicle is incredibly well-sorted when being driven at the limit. The R8 represents that rare combination of ultra-high performance with drivability that does not require an advanced degree in race car handling in order to appreciate the vehicle to its fullest. The vehicle has few competitors when it comes to speed and agility, save for the Lamborghini it shares its chassis with and a few of the other high-end exotics. Audi has hit upon a winning formula, and with a possible turbo-diesel version waiting in the wings, they may also have cornered the market on environmentally friendly sports cars as well.