The 2013 Audi allroad is a four door five passenger go anywhere wagon from the German luxury automaker that is an excellent alternative to the dreary crossover utility vehicle, and distinguished from more ordinary Audis by the Allroad’s familiar two tone exterior and an all new scalloped grille that was painstakingly chromed to outshine the competition.  In a nod to downsizing in the name of efficiency, the new Audi Allroad is based upon the B-segment favorite Audi A4 wagon, whereas the previous Allroad was based on the A6 Avant.  Despite using a smaller power plant than the previous version, the 2013 Audi Allroad’s 2.0 TFSI turbocharged four cylinder makes the same 258 lb-ft of torque as the old turbocharged V6, but is down a few ponies producing only 211 HP.  However on the plus side, the 2013 Allroad is more efficient than before and returns an estimated 20 MPG around town and as much as 27 MPG on the highway.

This much go is good to take the Allroad from 0 to 60 MPH in 6.5 seconds and will keep on going to a top speed of 130 MPH, thanks to an eight speed Tiptronic automatic transmission with manual shift and Audi’s patented Quattro all wheel drive.  Being the capable off roader that Audi intended, the Allroad has a self locking center differential as well as electronically controlled lockers front and rear hidden underneath, being shielded by skid plates and underbody panels, making it easier to traverse tricky terrain.  The 2013 Allroad also benefits from a total of 7.1 inches of ground clearance, riding 1.5 inches higher than the standard A4, and gains a bit of extra track thanks to some suspension bits from the slightly wider A5.  Ensuring that owners are able to take their keepsakes with them, every Allroad is blessed with a pair of raised roof rails that compliment the matching aluminum window frames.

Audi offers the 2013 Allroad in three distinct trim levels: Premium, Premium Plus and the top of the line Prestige.  The 2.0T Premium starts at $39,600 and includes a set of 18 inch 5 spoke wheels wrapped in all new rubber, a panorama sunroof creating an expansive two pane upward facing window that really opens up the interior as well as a pair of plush eight way supple leather wrapped power adjustable front seats.  Meanwhile audio duties are handled by the Audi concert radio, consisting of a ten speaker AM/FM/XM/CD/MP3 stereo with dual SD card slots and Sirius satellite radio.  The next step up is the $42,900 2.0T Premium Plus.  Available on the Premium Plus are a set of stylish 19 inch wheels, however the redesigned xenon plus headlights with LED daytime running lights and full LED taillights, power assisted tailgate, heated front seats with driver memory, three zone climate control and Audi music interface with iPod connectivity all come standard.

The top of the line 2.0T Prestige retails for $48,800 and is upgraded with Audi MMI navigation plus includes a seven inch color LCD display as well as SiriusXM Traffic and 3D topography maps, the adaptive xenon plus headlights now light up corners more effectively by pivoting up to 15 degrees in either direction based upon steering inputs from the driver, while Audi side assist helps to identify cars in the Allroad’s blind spots by displaying flashing LEDs on the side mirrors.  The Audi advanced key allows the Allroad to be locked, unlocked and even started without ever having to expose the key to the elements and a Bang & Olufsen premium sound system 14 speakers with surround sound reproduction makes up the in car entertainment.  Best of all, all Allroads come with Audi’s 4 year 50,000 mile warranty as well as Audi 24 hour roadside assistance for a full 4 years. 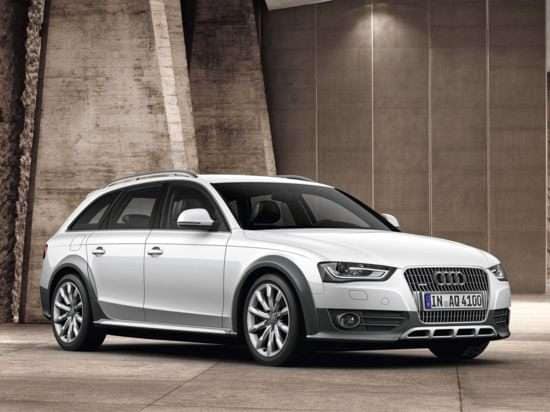