The Audi A7 is a four passenger four door coupe, like the Mercedes Benz CLS, thanks to an extended roofline that transforms the luxury sedan into a sport hatch with a little extra headroom for those get to ride in back.  The class crossing sport sedan is powered by a 3.0 Liter FSI direct injected supercharged V6 that produces 310 HP and 325 lb-ft of torque being sent to all four wheels thanks to Audi’s patented Quattro traction enabling system via an eight speed Tiptronic automatic gearbox.  The A7 can accelerate from 0 to 60 MPH in 5.4 seconds on its way to a 130 MPH top speed, all while achieving an estimated 18 MPG in the city and 28 MPG on the highway.  The German automaker offers the A7 in three distinct trims starting off with the base Premium model, next comes the Premium Plus and ultimately the top of the line Prestige.

The Audi A7 Premium comes complete with Audi drive select, allowing the operator to choose between comfort, auto and dynamic driving modes depending on how they’re feeling, a set of 18 inch wheels, tilt and slide sunroof, three zone automatic climate control, heated power adjustable front seats with position memory and Audi xenon plus headlights with LED daytime running lights.  On the inside the $59,250 base A7 offers up a leather wrapped multifunction steering wheel with Bluetooth controls to contrast the available Dark Brown walnut inlays, brushed aluminum inlays or fine grain ash inlays, while the Audi music interface with iPod compatibility and Keyless start ease owner’s ears and minds.

The next step up is the $62,870 A7 Premium Plus which adds a 7 inch multifunction display for the Audi MMI Navigation system with voice control as well as the back up camera and sensors for the Audi parking system to help save the larger 19 inch rims from suffering too much curb rash.  Meanwhile the top of the line A7 Prestige gets upgraded with Audi advanced key for keyless entry and push button start.  The $65,580 Audi A7 also comes with four zone automatic climate control and ventilated power adjustable front seats with lumbar adjustment for the driver as well as Audi xenon plus adaptive headlights with LED daytime running lights and available full LED lighting.  Being the Prestige model, the A7 benefits from the German automaker’s S line exterior trim and an available set of 20 inch rollers on the outside as well as a Bose premium sound system on the inside. 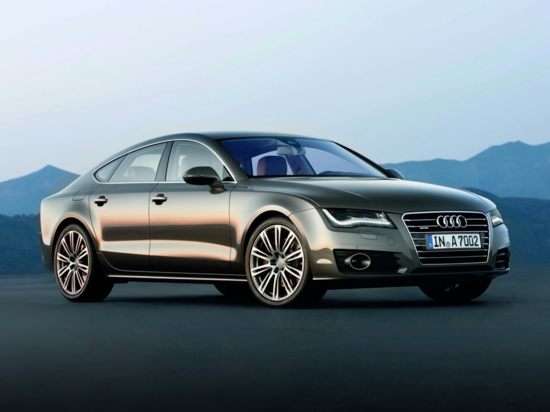