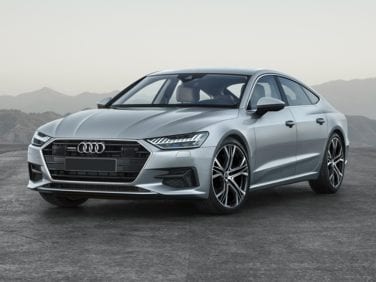 All About Audi A7

The Audi A7 infuses the Audi lineup with yet another heaping helping of style and sex appeal. Further, given its role as the sportier version of the A6, the Audi A7 frees the A6 to move farther toward the luxury end of the spectrum, enabling it to concentrate on ride over handling, while the A7 caters to the more athletically oriented four door Audi intender.

One of the most expressive examples of Audi’s four-door sedan design philosophy, the Audi A7 is a slightly different take on the four-door coupe profile, started by the Mercedes-Benz CLS back in 2004. Audi’s version of the genre adds a hatchback, though you’d be hard pressed to see it just looking at the styling of the car.

One of the chief advantages of that hatchback is the enhanced cargo capability it affords the sleekly styled Audi. It’s power actuated and height adjustable so the hatch can be used in a variety of circumstances. Plus, the rear seats fold to expand the cargo carrying capability of the Audi even more. Even before the rear seats are folded, the A7 boasts an impressive 24.7 cubic feet of cargo space.

It is a well-known fact—Audi’s interiors are the nicest of any mainstream luxury automobile. Audi’s fit, finish, materials employed, and the way it all works together is simply unrivalled in the industry. The wraparound dash design employed in the Audi A7 is at once handsome and functional. All key elements are focused toward the driver. Further, everything is in reach without the driver having to lean forward. Everything needed to operate the vehicle is within easy access.

The Audi A7 is fitted with a 310-horsepower supercharged 3.0-liter V6 engine capable of generating 325 ft-lbs of torque. An eight-speed automatic transmission is employed to transfer power to all four of the A7’s wheels. Audi claims a zero to 60 time of 5.4 seconds for this powertrain. Top speed is limited to 130 miles per hour. The other engine choice is a 3.0-liter turbocharged diesel producing 240 horsepower, 428 ft-lbs of torque, and a 0-60 time of 5.5 seconds.

Start/stop technology is incorporated to help improve fuel economy. Essentially, whenever the car comes to a prolonged stop, the engine switches off automatically and remains so until the driver releases the brake. The system is driver controlled and can be disengaged at will.

Striking a nice balance between style, luxury and performance, the Audi A7 is a remarkably versatile ride. Infused as it is with cutting edge technology, the A7 is also a thoroughly modern luxury/sports sedan.