2012 Audi A6: Introduction
By Lyndon Bell

The occasion of a new Audi A6 is an attention grabber for us because we’ve always been fond of Audi’s mid-size sedan. With its distinctive looks, comfortable interior and generous dose of gee-whiz tech appointments, the A6 has always had a lot to like.

While this new A6 follows the traditions established by its forebears quite competently, there is a new member in its family unit. Now that Audi has the A7 in the lineup, it can afford to skew the A6 a bit more toward the luxury end of the spectrum, allowing its new A7 sibling to lionize performance. What this means for the next Audi S6 is still up in the air. But one thing is certain; this new A6 is a softer in the suspenders than the car it replaces.

To readily discern the differences between the 2011 A6 and the 2012 A6, it’s necessary to park them side-by-side. In fact, you could be forgiven for sitting next to the 2012 model at a traffic signal with no awareness of your proximity to the all-new model. Almost magically though, the new car looks better and more svelte than the old car— without looking substantially different.

The 2012’s trunk is more elongated and incorporates a small spoiler along its trailing edge to improve airflow over the car while the nose of the new A6 drops more severely than the 2011 model. The new greenhouse is slightly taller, the car wears bigger tires and wheels, and the sides of the 2012 A6 have some wonderfully kinetic sculpted lines, imparting a sense of motion.

LED clusters provide distinct illumination treatments for the 2012 A6, both front and rear. Once you see them doing their thing, the look is forever seared into your memory—it’s that impressive.

All in all it’s a masterful execution of an evolutionary update. Everything there was to like about the 2011 model is preserved while simultaneously establishing a presence for the 2012 model all its own. And, 80 pounds were shed in the process.

This aspect of any Audi has been the company’s long suit for as long as we can remember. For the 2012 A6, the company pushed its boundaries even farther. In a word, the interior of the 2012 A6 is absolutely gorgeous. The sweeping lines of the dash begin and end with graceful scallops of trim in the front doors. Generous applications of grain-matched wood trim warm what is an exceptionally tech-laden environment, combining old school charm and grace with new jack functionality.

Interior highlights include a dedicated Internet connection, enabling the 2012 A6 to perform magical feats like incorporating Google maps into its navigation system. Now when you drive around, you see the actual buildings on your route. And, if you need a Web hotspot, with the 2012 Audi A6, you’ll be driving one.

The head up display projects information onto the lower part of the windshield in full color. Word of advice though, if you want to take full advantage of it, you’ll have to eschew your polarized sunglasses. Their polarization renders the head up display (any head up display, not just Audi’s) nearly invisible.

If you’re deep into Audio (and yes, the capital “A” was intentional) the optional 1300-watt Bang & Olufsen sound system will please your ears as well as your eyes with its uniquely designed retractable tweeters on the dash. Every contemporary audio source devised will find its way into and through the system to sensuously massage your eardrums.

Other interior highlights include the touchpad interface for Audi’s MMI system, which permits you to literally write out the addresses and phone numbers you need the car to access. Smart cruise control relieves the stress of driving in stop and go traffic. Active lane assist will nudge the Audi back into its lane if you allow it to drift too far without signaling your intention to change lanes, AND yes, the 2012 A6 will park itself when asked to do so.

Offered at launch with two engines; a 310-horsepower 3.0-liter supercharged V6, which is kind of interesting in that Audi designates the nomenclature of the car as A6 3.0T, where in the past, a “T” suffix has always meant the car was turbocharged. Which it does on the other engine offering—the 211-horsepower 2.0-liter turbocharged four-cylinder A6 2.0T.

While it may seem a downgrade to apply a four-cylinder engine to a car in the A6’s category, the 2.0T makes more torque, lower in the rev range, than the 2011 A6’s 3.2-liter V6. Paired with a continuously variable transmission, the 2.0T should provide a fluid flow of seamless propulsion. While we have yet to drive an A6 equipped with the turbocharged engine, we expect it to return superior fuel economy as well.

We have driven the car with the supercharged V6 and confidently pronounce it fit for duty. Acceleration is strong throughout its range. The 3.0T has a broad powerband with plenty of torque down low. In other words, you say “go”, and the 2012 Audi A6 3.0T streaks away from the line, accelerating vigorously all the way to its artificially limited top speed of 155 miles per hour. The power comes on both smoothly and evenly and the engine feels like it will provide acceleration into infinity (and yes) beyond.

As a highway car, the A6 is firmly in its element with its Autobahn training gloriously shining through. The experience is characterized by outstanding stability, quietness and deliberate assurance at elevated speeds. Around town, the A6 handles easily; the eight-speed automatic transmission shifts smoothly and is always in the right gear. In fact, the Audi goes about its day-to-day in a quiet and sophisticated manner wholly befitting its patrician good looks.

Ask it to attack a winding two-lane road though and things change a bit. Audi’s sedans with electric power steering have always been criticized for their relative lack of steering feel and while this isn’t really an issue for us, many reviewers demerit the A6 for this. The beauty of the electric steering is it permits self-parking and auto lane correction. However, the downfall of it for some drivers is an “artificial” feel. This, when taken in conjunction with the Buick-ization of the 2012 A6’s ride mean it’s a bit less engaging in the twisties than the 2011 model. The car still goes well and grips like mad, it just doesn’t feel at home doing it.

Audi’s engineers simulated some 4,000 crashes in the computer to ensure the new A6 would shrug off anything short of a thermonuclear incident. OK, that’s an exaggeration, but the point is, every contingency they could think of has been tested and developed for. As an example, crumple zones are incorporated into the sides of the car as well as the front and rear ends.

Naturally, the alphabet soup of acronyms common to the safety systems in today’s cars is present and accounted for. ABS, ESC, AWD, as well as active seatbelts, smart airbags, and a system that even pays attention to potential rear-end collisions comprise just a bit of the 2012 Audi A6’s safety spec.

New, yet familiar, the 2012 Audi A6 has evolved into even more of a luxury car. In true Audi tradition, the car is a technological masterpiece, breaking new ground in terms of functionalities. From its ability to function as a Wi-Fi hotspot, to the incorporation of lane keeping technology, active cruise control, blind spot monitoring and other advanced features, the 2012 Audi A6 is indeed a technological tour de force. Yes, it’d be nice if it were more engaging on twisting two lanes. However, if you’re that type of driver and you absolutely need a comfortable four-place sedan in an Audi, you can simply stride across the showroom that shiny new A7. 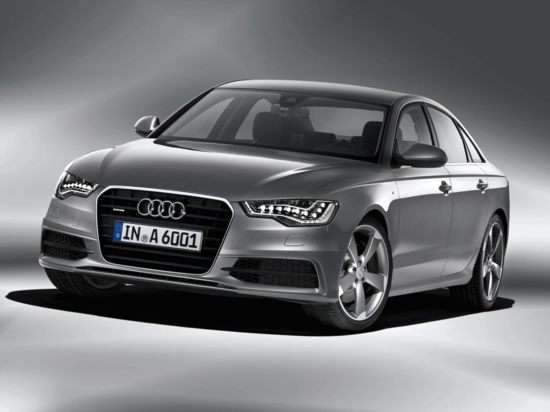