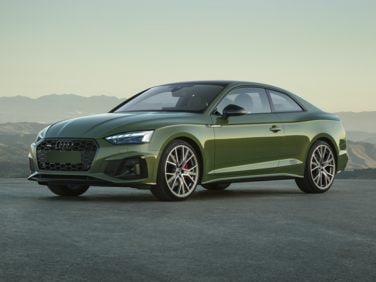 All About Audi A5

The Audi A5 is a two-door, 2+2 luxury sports coupe. The 2009 Audi A5 is a carryover from 2008. The 2009 A5 comes in a single trim, the 3.2 FSI. This vehicle is powered by a 3.2 liter V6 engine that generates 265 horses and 243 lb-ft of torque. All-wheel drive is provided as standard equipment, and buyers have the choice of either a 6-speed manual or 6-speed DSG automatic transmission with manual shifting capabilities. Fuel mileage for the 2009 A5 is rated at 18 miles per gallon in the city and 27 miles per gallon on the highway.

While Audi had enjoyed success with its Quattro Coupe in the 1980’s and early 90’s, almost ten years went by without a two-door version of the entry-level A4 sedan in the vehicle lineup. This was despite the fact that direct competitor BMW had been offering the 3-Series in coupe form since the vehicle’s inception. In 2008, Audi decided that the time had come to transform the popular A4 into a luxury coupe, and by applying some of the styling concepts that had been explored in the Nuvolari concept car, the A5 was born.

While the Audi A5 sits on the same platform as the A4, it is positioned as more of a touring car than a sports coupe. The focus of the vehicle is on luxury instead of all-out performance, despite going up against the sporty image which BMW has managed to create for themselves in the marketplace. The A5 bears a single power train: A 3.2 liter direct-injection V6 engine generating 265 horsepower and 243 lb-ft of torque powers all four wheels through Quattro all-wheel drive. A 6-speed manual transmission or a 6-speed automatic with Tiptronic driver-controlled shifting can be mated to the V6. When equipped with the manual, the A5 can reach 60 miles per hours in 5.8 seconds, which is more than respectable for a luxury coupe.

Inside the A5, quality materials abound. Seats are wrapped in leather, and the rear seat can be folded down in order to accommodate larger items being hauled in the trunk. A Bang & Olufsen stereo system is optional, and all multimedia functions are controlled by Audi’s MMI controller located just behind the gear shift on the center console. The vehicle’s interior feels spacious despite only having two doors, and it compares favorably with much pricier grand touring vehicles such as the Jaguar XK8. Like most Audi’s, the A5 can be upgraded with a Premium package which adds xenon headlights and a driver’s memory seat, and the S line package, which provides 19-inch wheels, sport seats and a stiffer suspension.

Excellent brakes and the grip of Audi’s Quattro system make the A5 a stable, safe performer over rough pavement or on mountain curves. The vehicle is also nimble on crowded interstates, able to pass and squeeze through openings in traffic with ease and a distinct lack of drama. The heavy weight of the car does make for some depressing fuel economy numbers, however, with the car getting 18 miles per gallon around town and 27 on the highway – almost comparable to a mid-size SUV in city driving. However, few SUV’s provide the beautiful styling and top notch interior of the A5, let alone the performance, and these factors contribute to a willingness to overlook some of the coupe’s less frugal aspects.

The Audi A5 is a breath of fresh air into the entry-level luxury coupe market, and the quality of the interior and standard all-wheel drive help to raise the vehicle above its market and let it compete with coupes positioned at much higher price points.